The go-to lawyer for NRL stars has called for a radical overhaul of the judiciary system that includes the players’ union helping to fund and select panellists to ensure the system is truly independent.

The NRL will undertake a holistic evaluation of the match review and judiciary processes at the end of the season, a move welcomed by South Sydney. The Rabbitohs are aggrieved that Latrell Mitchell has been suspended for a month after he was unable to earn a downgrade on a grade-two dangerous contact charge for an incident involving Wests Tigers winger David Nofoaluma. 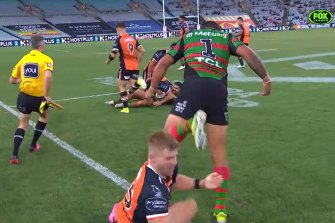 Latrell Mitchell lashes out at Luke Garner, which cost him $1600.

Souths coach Wayne Bennett lashed out at the three charges Mitchell received, claiming none of them deserved a suspension. The veteran mentor won’t have the star fullback for a further three games after the Rabbitohs defeated the Titans without him on Friday night.

Ghabar said there were too many different types of charges and that all loading for previous offences should be capped at 25 per cent. Currently, loading for similar offences is 50 per cent, while for different charges it is 20 per cent.

At present, the panellists hand down findings without being made aware of loadings or carry-over points from previous offences. Ghabar said it often resulted in heavy-handed decisions .

“They should know if they find a bloke guilty of a grade two, for instance, that he is sitting out for four weeks,” he said.

Despite being sidelined, Mitchell remains in the headlines. The NRL and the Rabbitohs have lauded Mitchell for calling out racist taunts on social media, which helped lead to the arrest of two people. The former Roosters back is scheduled to speak publicly about the issue at a press conference on Monday.