St Kilda veteran Dan Hannebery believes AFL players deserve to be freed from the strict controls over their movements in Queensland when their seasons end.

As the AFL considers the vexed issue of how to manage the large number of players who will be in Queensland once their season ends – and whether there should be restrictions in a state that has more freedoms than Victoria – Hannebery, who is on track to return in the finals if St Kilda make the eight, said on Wednesday that the players "deserve a bit of a break" and the opportunity to relax and enjoy themselves "in the right mature way". 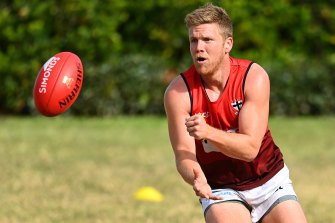 "It's one of those ones where I guess the AFL and the government are working pretty closely together, we've been under strict protocols for a long long time as players that have been above and beyond Victoria and then we've also gone to stage four well," Hannebery said.

Hannebery said it had been a long year for players, club staff and AFL administration and the "clear message" would be for players to be smart and mature in relaxing once their seasons ended.

" … I think what the clear message will be 'be smart, behave, be mature try and enjoy yourself, relax go to a cafe for breakfast, go to a restaurant for dinner, enjoy a few beers if the season's over and do it in you know in the right way'."

Hannebery, meanwhile, is on track to be available for the first final if the Saints make the top eight as he continues to build fitness after hamstring surgery in July.

The Saints have sat in the top eight since round four and play West Coast and the Giants in their final two games. They are likely to make finals if they win at least one match and miss out if they lose both.

The 29-year-old admitted the final round was too close for him to return but he was hopeful of playing a scratch match on the pre-finals bye weekend.

"I'll probably only get one full session with the group [before the final round]," Hannebery said. "It could just almost be one of those ones which is out of my hands.

"They might want to get another couple sessions in so the timing is probably just a bit stiff but I'll certainly be absolutely ready to go hopefully for some sort of scratch match on that bye weekend."

Hannebery has played in 22 finals and was considered one of the stars of the competition three years ago but injuries have made life tough for him since 2017 and he has played just 10 games with the Saints since he joined in 2019.

"It's probably been the most challenging couple of years I've had in my footy career in terms of injury and set back and frustration … not being able to display that sort of football I guess I knew I was capable of just through injury," Hannebery said.

The experience has made him cautiously optimistic that this latest bout of treatment has cured his hamstring woes with the surgeon telling him he found some "funky stuff" floating around when he opened his leg up to operate.

"Fingers crossed that that's the end of it," Hannebery said.