All sorts of records were supposed to be in danger of falling ahead of this game. Surely, the rampaging Brisbane Lions, with the best attack in the game, would annihilate the topped-up, bottoms-out West Coast Eagles at their Gabba fortress?

As we all know by now, the Eagles are suffering the season from hell, with less than 22 players to choose from, forced (again) to dip into the WAFL reserves to field a side. Two players decided to go clubbing during the week. The coach has COVID-19.

And still, the record books are safe. West Coast played to limit the damage, flooding their defence as much as they could, with veterans Jeremy McGovern and Shannon Hurn marshalling their shattered troops as best they could. 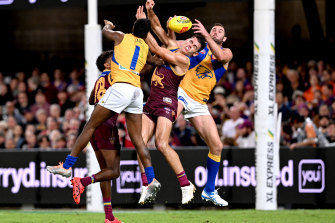 The Lions weren’t as good as some thought they’d be, and the Eagles weren’t as bad.Credit:Getty Images

If avoiding a massive blowout was the aim, then stand-in coach Matthew Knights can chalk up a win of sorts, the Lions going on to win by 75 points: bad enough, but not quite the disaster many predicted. 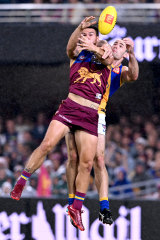 Cameron Rayner in action at the Gabba.Credit:Getty Images

The Lions also suffered a significant blow late in the first quarter, when forward Dan McStay badly rolled an ankle and came straight off, in pain and punching the turf in frustration. With Joe Daniher hurting a shoulder last week, the home side suddenly lacked a key forward.

Eric Hipwood, missing for 10 months after wrecking a knee last year, is available for selection next week against Adelaide. It raises an interesting question: will the gangling tall be rushed or eased back in? The Lions are not playing in the VFL next week.

It was a gruelling spectacle even for the most partisan home fans. By half-time, the predicted massacre wasn’t happening, with the Lions having kicked just the five goals. Mind you, the Eagles had 1.1 on the board. Scoring themselves looked like a luxury, even an afterthought.

But at least they were having a decent crack. At least until the last quarter, they were breaking more or less even in contested possessions and at the clearances, despite being at a severe disadvantage in the ruck.

With the ball almost permanently camped in the Lions’ forward line, the biggest issue for the Lions was picking their way through. Their main avenue was Charlie Cameron, who continued a rich vein of form with four goals. 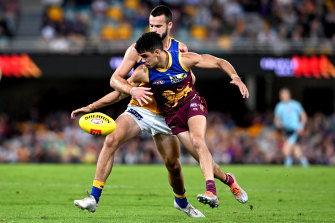 Cam Rayner was another, despite a glitch on the stroke of half-time, taking a step off his line a second after the siren. The former No. 1 pick is looking better by the week, at one point shoving Hurn, with 309 games to his name, out of the way to mark. Not many can do that.

For the Eagles, Liam Ryan looked like the only forward capable of scoring, and he obliged with three goals from limited opportunities. Josh Kennedy and Jack Darling were non-factors, but can hardly be blamed. 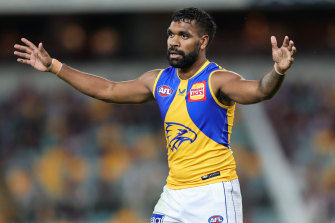 It wasn’t until the final quarter that the Eagles finally wilted. Hugh McCluggage, probably the most damaging player on the ground on the night, iced his game with three brilliant goals and three assists to compound the Eagles’ misery. But really, it could have been worse.