Greater Western Sydney’s interim coach Mark McVeigh made his pitch for the Giants’ vacant senior coaching job on Tuesday, just days after he said the club “embarrassed” itself in their 73-point loss to cross-town rivals Sydney on Saturday.

The 41-year-old’s forthright post-match media conference, in which he named eight players he considered to have put in the required effort, created a stir externally; many considered it would put a line through his chances of winning the job on a permanent basis. 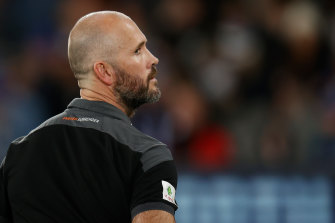 Mark McVeigh is a candidate for the Giants senior coaching job despite their performance in the back half of the seasonCredit:Getty

However, the club hierarchy said his comments were justified, with the long-serving assistant coach having strong enough relationships with the players to make such a strong, public declaration and a club source confirmed he was presenting for the job on Tuesday.

The Giants have already spoken to four-time premiership coach Alastair Clarkson on three occasions with club CEO Dave Matthews and board member Jimmy Bartel meeting him in Melbourne last week. The club has also met Richmond assistant coach Adam Kingsley and Melbourne coach Adem Yze and both of their current clubs are happy for them to pursue the position.

Greater Western Sydney sit 16th on the ladder, their lowest position in the second half of the season since 2014, having won just five matches this year. McVeigh has coached them to three wins – against West Coast, North Melbourne and Hawthorn – in his 10 games after taking over from Leon Cameron after round nine when the Giants sat 15th with two wins on the board.

McVeigh has been an assistant coach at the Giants since 2015, taking the job two seasons after he finished up at Essendon, where he kicked 107 goals in 232 games and was vice-captain. When he became interim coach his former Bomber teammates James Hird and Dean Solomon joined him in the coaches box. Solomon had not been at the club before that point. Keeping the trio on board with the club is expected to be part of McVeigh’s pitch.

Cameron’s departure has put the Giants at a crossroads as they face up to missing finals for just the second time in the past seven seasons. Several players, including Tim Taranto, Jacob Hopper, Tanner Bruhn and Bobby Hill are potentially on the move next season, and they have a core of highly paid players with several years to run on big contracts.

They will once again have early draft picks, although they are likely to be in the market for players to balance a list that has had a heavy concentration of midfielders although defender Sam Taylor should be in All-Australian contention after a brilliant 2022.