Michael Maguire says Benji Marshall's axing was the toughest decision of his coaching career but believes anger over the Tigers legend's exit should not be directed solely at him.

Maguire faced reporters on Friday amid a turbulent week at the club, following reports he has lost the dressing room due to his tough style of coaching. 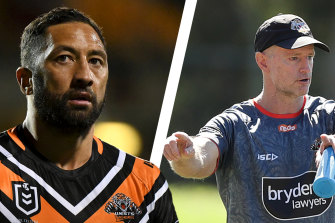 On Tuesday night, Marshall told NRL 360  he found out about the split via the Herald’s story on Monday before an official announcement on Tuesday. Credit:NRL photos, Getty Images

On Tuesday night, Marshall told NRL 360 he found out about the split via the Herald's story on Monday, some hours before the official announcement on Tuesday.

Maguire said it was "disappointing" to see sensitive information leaked from the club and wished Marshall had not found out in such a way.

Another leak occurred following a club crisis meeting on Monday, at which players revealed they felt as if they were walking on eggshells around Maguire.

"It shows where we are this moment in time and what we need to move towards," Maguire said. "Top-end teams, that never gets out, does it?"

Maguire also urged the code's executives to look at restrictions around player contracts, frustrated at the long-term roster he has inherited from Cleary's tenure.

Unwilling to budge on his renowned hard-nosed approach, his relationship with players who signed up for Cleary's softer methods seem to be wearing thin.

"When you first walk into an organisation, you've got what you've got for the period of time players have," he said. "Sometimes players ebb and flow with injury and form, and you've got to work through that period of time to get to the other end to change up the salary."

"The powers that be have to look at that."

The club has $1 million left in their salary cap for next year, with another five spots still to fill.