Without a player manager in his corner spruiking his wares, if Garrett McDonagh wanted the AFL career he had dreamed about for so long, it was going to be up to him to fight for it.

So, after an impressive year with Richmond’s VFL team, and on the advice of close mate and North Melbourne backman Aidan Corr, the new Essendon recruit took it upon himself to fire off a volley of emails to prospective AFL clubs who might have been looking for a mature-age defender to add to their list for next season.

Fortunately for the 25-year-old, a host of clubs responded showing interest, including the Bombers. 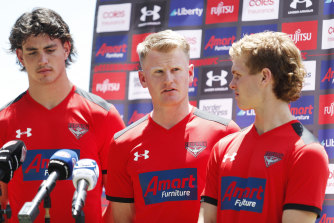 Make it happen: Garrett McDonagh, centre, at The Hangar. Credit:Getty

But it wasn’t until McDonagh received “an amazing call” from Essendon recruiting boss Adrian Dodoro a few weeks ago that the reality began to set in that his lifelong dream was on the verge of coming true.

McDonagh, who was first eligible to be drafted in 2014, admitted it took him by surprise that he was selected in the national draft at his age.

“I was expecting nothing. I wrote to a few clubs after the season just to try to get my name out there because I had no managers, so I was just trying to do it all myself,” the overall No.50 pick said.

“I said I’ll do anything I can to get on a list, so there was a bit of that involved in the email.

“It’s been an actual whirlwind of a ride, and [I’m] so grateful for this, hopefully, journey of mine.

“I can’t thank Richmond enough for what they’ve done for me in the lead-up to this moment and also to Essendon for taking the chance on me being a mature-age [player] and a 25-year-old – there’s not many of them getting drafted at the moment.”

McDonagh admitted there were times he lost faith he’d ever make it to the big time, but after trying his luck at NFL punting in 2018, re-evaluating things and spending “a little bit of money on my body”, he got himself back on course and is now daring to dream about playing in blockbuster matches such as Anzac Day in front of packed houses.

McDonagh is still without a manager, and based on his ability to talk himself onto an AFL list he might not need one, but that situation is expected to change in the not-too-distant future.

“They’re in the talks, so over next week and leading up to Christmas, I’ll try to get one,” he said.