Collingwood were finally made to pay for their recent run of poor first quarters as Melbourne mercilessly mauled the Magpies on the way to a crushing 56-point win at the Gabba on Saturday.

The Demons moved into the top eight with their third-straight win while the Magpies missed the opportunity to temporarily sneak into the top four with more injury dramas and butchered ball.

After overcoming horribly wayward, wasteful and sluggish starts against cellar-dwellers Sydney and Adelaide, the Pies were punished by a dashing Demons side that got on top early and set-up their fifth win in the last seven outings with a seven-goal rampage in the second quarter. 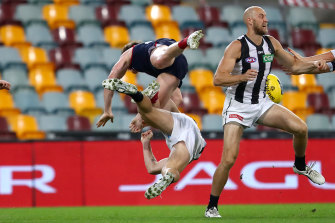 The forward was playing his 52nd-consecutive game since debut and his day was over after a marking contest with Aaron vandenBerg. The Demons' shoulder collected Mihocek who then crashed head-first into the turf.

The game was delayed for several minutes as Mihocek – Collingwood's leading goalkicker in 2020 with 14 majors – was carefully lifted onto a medicab by Collingwood medical staff and taken from the field.