There have only been two mid-week Bledisloe Cup matches and both have ended in high drama: the Gregan tackle of 1994 and the Raynal ruckus of 2022.

So the faint-hearted can consider themselves warned: the midweek Bledisloe Cup fixture appears set to be a semi-regular occurrence after a successful switch in Melbourne left broadcasters, the Victorian government and Rugby Australia all happy.

In one of the strongest ratings performances in many years, the Wallabies-All Blacks clash drew in 630,000 viewers on Channel Nine nationally, and with 70,000-plus streaming the game on 9Now, finished with an audience of more than 700,000.

That surpasses the 630,000 who tuned in to watch the Wallabies take on England in Brisbane in July, and combined with Stan viewership figures (which do not get released), informed sources said the Bledisloe Cup clash would have drawn in an audience of more than 1 million viewers.

It’s a long way short of the record audience of 3.234 million – with 1.788 million viewers on free-to-air TV on Nine – for the 2011 Rugby World Cup semi-final between Australia and New Zealand.

But given the experimental nature of the switch to Thursday night, which was done to avoid the AFL finals in Melbourne, the strong television audience and a sell-out crowd of 53,245 at Marvel Stadium is being viewed as a big success by all parties. 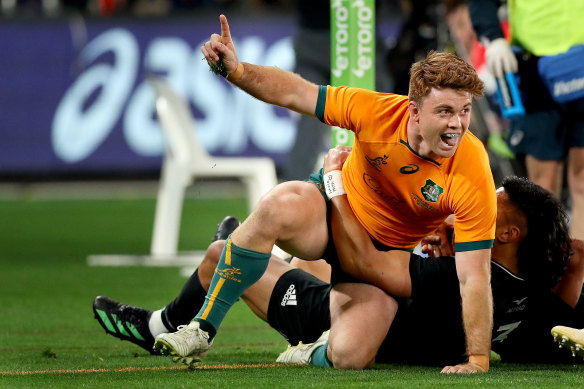 Sources with knowledge of the situation say the Victorian government officials were very pleased with the success of the Thursday Bledisloe Cup, and with the potential to lure visitors to the state for a long weekend, is a fixture they’d be keen to do again.

Key figures at the Nine Network, which publishes this masthead, are also open to more midweek Tests and flexible Wallabies scheduling, which takes in day matches as well.

In the hours prior to the Bledisloe Cup Test in Melbourne, Rugby Australia chairman Hamish McLennan was asked if more midweek Tests could be on the cards.

“Absolutely. State of Origin is played midweek. Why not?” McLennan told reporters.

“It’s all about creating clear air for the game. We did an experiment in Adelaide which paid off playing in the afternoon. We’ll schedule more and more games in prime time. Thursday is a good night for sport.”