Anthony Milford arrived in Brisbane in 2015 as one of the hottest talents in the NRL, an electric playmaker many at Red Hill felt would eventually breathe the same rarefied air as Johnathan Thurston.

Now he’s become a shadow of the fleet-footed, intuitive footballer who could see things others could not and shape the game to suit. Laden with the expectation of a million-dollar contract that was too much, too soon, Milford is being eaten alive by his own doubts as he career reaches a genuine crossroads. 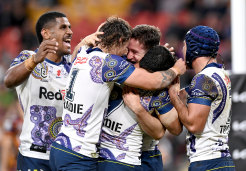 Melbourne brought Brisbane crashing back to earth a week after their shock win against the Roosters.Credit:Getty

Brisbane would suffer a heavy 40-12 at the hands of the Melbourne Storm at Suncorp Stadium on Thursday night, with normal programming resuming after their upset win over the Roosters last week. To make matters worse for the Broncos – and NSW – star middle Payne Haas suffered a medial ligament injury that will sideline him for two to four weeks.

But it was Milford in the spotlight in the first half, for all the wrong reasons. He turned in an error-riddled performance where passes went to ground time and again, including three in his own half, one of which directly led to points to Melbourne, who have now won their past 10 clashes with Brisbane.

Even with a moment of rare clarity in the second half, when he kicked short for a try for Jesse Arthars, it was another lamentable outing for a player who the Broncos won’t be offering a new deal at the end of the season and seems destined to spend the bulk of it in Intrust Super Cup.

Kevin Walters doesn’t have endless options in his halves but by the 68th minute, he had seen enough, with Milford watching the defeat from the bench after being given an overdue tap on the shoulder. 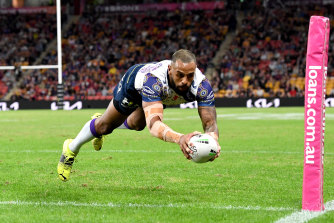 Melbourne’s Josh Addo-Carr puts his name on the scoresheet again.Credit:Getty

Yet if there was one note of positivity for Brisbane, it was the man who could potentially fill the roster spot Milford is likely to vacate. Nicho Hynes, Melbourne’s second-choice fullback, was brilliant for the Storm, having his hands on the ball all night to set up two tries and score one of his own.

The Broncos want him badly and have put an offer on the table they hope is enough to lure him north. Melbourne would love to keep him but have to convince him to carry Ryan Papenhuyzen’s second fiddle.

Melbourne’s ability to regenerate is legendary and once again they replace an injured star with a player who would step up to be one of his side’s chief destroyers. He’s faster than he appears and his vision and passing game has flourished with the more game time he’s given by Craig Bellamy.

There were other major contributors for the Storm, including hooker Brandon Smith, who continues to make the most of Harry Grant’s injury absence. He scored his side’s opener, added another in the second half and kept Brisbane on the back foot all night.

Maroons prop Christian Welch was another name missing from the Melbourne team sheet, although the Broncos were without the suspended Matt Lodge, who has been excellent in their engine room of late. His go-forward was sorely missed.

The game was also notable for its lack of high-tackle stoppages. Two players were put on report – Melbourne’s Justin Olam and Brisbane’s Ethan Bullemor – but nobody was sent to the sin bin.

The bad news for the NRL was that it was another huge scoreline in a season of blowouts. Brisbane were competitive for 20 minutes but Melbourne would go on to win their ninth straight by 13 points or more, an NRL record.