Gold Coast have announced that star midfielder Touk Miller has re-signed with the club for five years just a day after being embarrassed when Hugh Greenwood joined North Melbourne as a delisted free agent after the club temporarily took him off their list with the promise of re-drafting him.

Miller’s signature comes at a good time for both club and player, with the 25-year-old completing an outstanding season in 2021 when he was named All-Australian and won the club’s best and fairest for the first time. 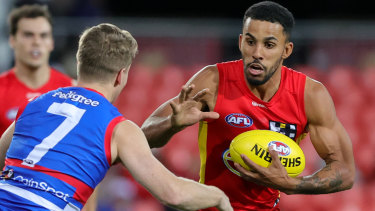 Touk Miller has inked a five-year extension with the Gold Coast Suns.Credit:AFL Photos

He has long been regarded as a heart and soul player at the club, but his improvement in recent seasons has seen him pushing to sit among the game’s elite midfielders.

Miller, who would have been a free agent at the end of 2022, will be at the Suns until at least the end of 2027 as they attempt to keep their talented list together to push for a finals spot under Stuart Dew, who enters the final year of his contract under pressure to retain his position beyond next year.

Miller, a Victorian, told AFL media he did not want to be at any other club with his commitment to the Suns genuine.

“I would love to be etched into the walls and be part of what this club wants to be,” Miller said.

The club acknowledged the Greenwood situation had not panned out how they hoped but the offer he received from the Kangaroos was impossible for them to match, with the removal of his contract freeing up cap space as they look to extend the contracts of talented youngsters Ben King, Izak Rankine, and Jack Lukosius beyond the end of next year.

Meanwhile, Geelong have lured dual premiership player Shannon Byrnes away from the defending premiers Melbourne to work in player development at his former club, having worked in a similar role at the Demons for the past seven seasons.

James Kelly has returned as an assistant coach, and Harry Taylor to head up medical and conditioning services, while Matthew Egan, who worked with Byrnes at Melbourne, is the new head of development.

Byrnes played 108 games with the Cats, including the 2007 and 2009 flags alongside Kelly, with Taylor a teammate in the 2009 win. Egan suffered a career-ending injury at the end of the 2007 home and away season.

The 37-year-old originally from Shepparton finished his career at Melbourne after joining the club as a free agent at the end of 2012.

The Cats tumbled out of the finals in the preliminary final when Melbourne beat them by 83 points with club legend Matthew Scarlett resigning as an assistant coach, premiership star Corey Enright joining St Kilda’s football department, and Matthew Knights moving to West Coast.