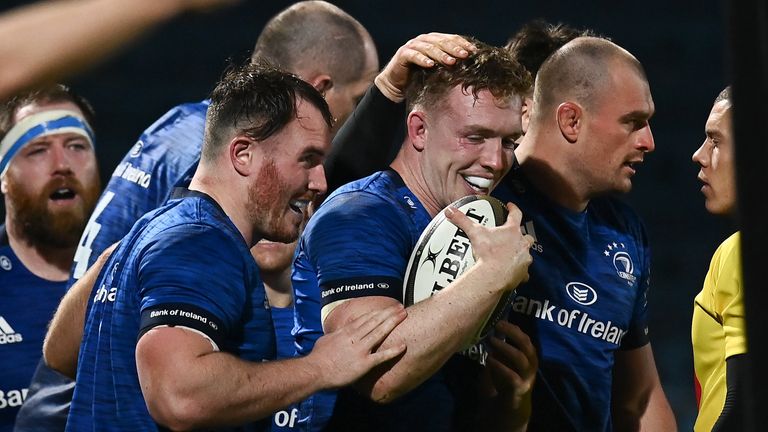 Recap all of Monday night’s Guinness PRO14 action as Leinster and Ulster maintained their 100 per cent starts in emphatic fashion, and Cardiff Blues won too…

It was a sixth straight bonus-point triumph for the Conference A leaders, who are one away from equalling the Championship record of seven.

Helping the hosts into a 26-3 lead, Dave Kearney, Luke McGrath (2) and Peter Dooley all dotted down during a fruitful 27-minute spell before half-time.

Marcell Coetzee scored a first-half hat-trick for Ulster to set up a bruising 57-14 Guinness PRO14 victory at Zebre.

The South Africa international ran riot in the first 40 minutes and then added a fourth try after the break as the visitors consolidated second place in Pool A.

Coetzee’s fifth-minute opener, which was converted by Bill Johnston, was cancelled out by Antonio Rizzi for Zebre, but then Ulster put their foot down.

Coetzee crossed the line twice more either side of Stewart Moore’s try, with Johnston adding two conversions, to give the visitors an emphatic half-time lead.

Johnston added a try of his own after the break, with Luke Marshall, Coetzee, Ethan McIlroy and David Shanahan all touching down in a romp in Parma.

Cardiff Blues ended a run of three consecutive PRO14 defeats with a 22-5 victory over Benetton at Rodney Parade.

It's all over in Wales, and @cardiff_blues have got their first win in four! 🙌

Tries from Rory Thornton, Ben Thomas and Owen Lane saw Blues pick up a much-needed win which saw them join Scarlets in second place in Conference B.

Jarrod Evans kicked a penalty and two conversions to ensure the Italians remain without a league win this season as they could only manage a consolation try from replacement Tomas Baravalle.