Panthers co-captain Nathan Cleary has been left “bummed” and feeling as if he has been suspended after being told he would not play in Thursday’s grand final rematch due to a high shot he copped last week against the Bulldogs.

Head coach Ivan Cleary said he personally would have felt comfortable playing his son in the game but would instead bring Matt Burton into the side to meet concussion protocols. 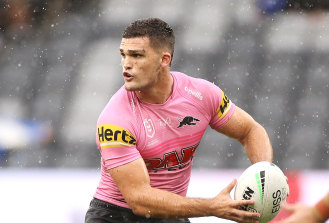 Panthers co-captain Nathan Cleary will not feature against the Storm on Thursday.Credit:Getty Images

With just five days between games, the Penrith coach said there was not enough time to pass all of the required tests.

The NRL has already seen an increase in the number of high shots this season, which has been blamed on a lack of fitness due to the new rules.

“It’s a hard one with concussion; because they’re all different. Sometimes the really big ones, players can be fine the next day sometimes the seemingly smaller ones, the effects can last for a while.

“The system is there to protect the players so we obviously respect that. But it’s definitely disappointing he is not playing but we’ve got full faith in Burto [Burton] and he gets an opportunity so looking forward to seeing him play.”

Cleary’s absence allows for the much-awaited return of Burton to first grade. Burton has signed with the Bulldogs for the 2022 season with the Panthers reluctant to immediately hand him over to the Belmore club.

Cleary said this week was a clear example of why.

“We’ve got a squad we like to think we can cover most people, we don’t want to ever feel like we can’t win a game because one player is out,” Cleary said.

“This week we’ve seen why we wanted to do that.”

Cleary said he is yet to decide where Burton will play, with Tyrone May also capable of stepping into the halfback role.

The Storm will also be without one of their stars, with fullback Ryan Papenhuyzen also set to miss the clash at BlueBet Stadium due to a neck injury.

The Panthers will allow any State Emergency Service personnel to attend the game for free after the eldest Cleary was evacuated from his Nepean home on Sunday due to floods across NSW.

“It was a little bit worrying on Sunday watching the waters rise throughout the day but we got pretty lucky really … we pretty much got out scot-free,” Cleary said.

“The SES did an incredible job in terms of organisation and how quickly they got onto everything out here. A big part of the reason most people came through was because of those guys. I hope to see a lot of them at the footy.”