Brownlow Medal-winning midfielder Lachie Neale is set to return for Brisbane in their first versus third table clash against Melbourne on Friday night.

Lions coach Chris Fagan said Neale only had to get through a light run on Thursday to get selected, having not played since round six due to an ankle injury.

“Blokes like Lachie Neale and Ryan Lester are in calculations, but they need to train this afternoon and get the final nod,” Fagan said on Thursday. 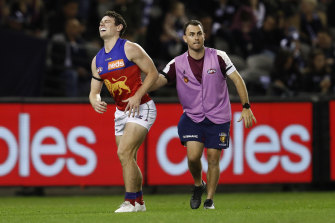 Lachie Neale just after he injured his ankle against Carlton in round six. Credit:Getty Images

“It’s a big game, first versus third. It’s good that we are going to have the opportunity to be tested by them.”

Meanwhile, the Demons are mulling over who will replace important wingman Ed Langdon. Langdon will miss the match due to concussion. Demons coach Simon Goodwin ruled out moving in-form forward Tom McDonald to the wing.

“We’ve got a few guys putting their hand up. Oskar Baker, Tom Sparrow, Kade Chandler. They’re all guys that will travel with us and be available for selection,” Goodwin said.

Melbourne have taken 26 players to Sydney for the clash against Brisbane, and they expect to return to Melbourne after the match. Jack Viney won’t play, and he is expected to return after the Demons’ bye in round 14.

“We will assess what that looks like this week. We have done it a couple of times this year, last week we did it with success, but we will go into this game knowing we have a number of players to shut down,” the coach said.

Goodwin also said he supported next week’s Queen’s Birthday “Big Freeze” match for motor neurone disease being played in front of fans outside of Victoria. Sydney and Adelaide could host the match.

“You’d think yes [the game will be outside of Victoria],” he said. “The Big Freeze is one of those games that deserves fans. It is a great occasion, a great game and if we can play that game in front of fans … I think that’s a great thing for our game.”