Home » Rugby » No room for Cripps, Bontempelli or Fyfe in interim All-Australian team

Patrick Cripps, Marcus Bontempelli and Nat Fyfe entered 2020 as potential rivals to Dustin Martin as the AFL's premier player. Yet, none of that powerful midfield trio have yet performed well enough to warrant selection in an All-Australian team at the mid-point of this strange compacted season.

Cripps has been curtailed by the opposition's tactics – to the point that the Blues have complained to the umpiring department – while Fyfe's output has been reduced by the only opponent who has genuinely stopped him over the past six years: injury.

Bontempelli's had marvellous moments, most notably when the Dogs beat the Swans, but, like his team, he has not produced consistently at a level commensurate with his considerable talent.

This has been a season for small forwards and defenders. Key forwards have continued their long-term decline, a consequence of the way teams defend with numbers.

It follows that the easiest players to select in the mid-year All-Australian side were the game's three standout small forwards of 2020: Tom Papley, Charlie Cameron and the villainous pit bull whom every fan would love in his team, Toby Greene.

Papley has vindicated Sydney's decision to hang on to him when he requested a trade to Carlton. The speedy Cameron has been equally potent and Greene has revived the slumbering Giants twice with match-winning hauls of four and five goals against Collingwood and Richmond.

A fourth musketeer among the small forwards has emerged unexpectedly, too, in the slight form of St Kilda's bargain recruit Dan Butler, whose goals and tackling pressure have been sufficient to earn him a spot on the bench in this interim best team.

Of the remaining three spots in the forward line, one goes to the season's most productive marking forward, Port Adelaide's Charlie Dixon, whose ability to mark in the scoring zone has been nonpareil.

The dismal returns from key forwards was such that I considered picking a team with only one (Dixon) and filling the remaining five slots with smalls or medium-sized forwards.

But this is not how you would structure a team against the modern defences, which have outstanding intercept marking players who must be occupied – think the two Jeremys, McGovern and (injured) Howe – and GWS' Nick Haynes. A second tall must be selected, thus, to keep interceptors honest. Geelong's Tom Hawkins, the next best in the eight completed rounds, gets the gig.

The final forward spot, a half-forward flank, can only be filled by one player, who's probably the most dangerous one-on-one target when isolated and almost as dangerous in the middle. 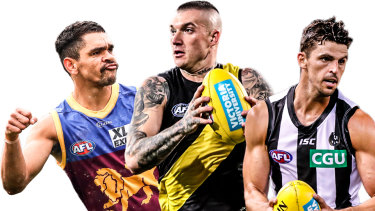 Martin underscored his stature as the game's most potent player in the Tigers' dismembering of the Bulldogs; Dusty is not playing at 2017 standards (yet), but doesn't need that level to make the best team – or best handful – of 2020.

In the backline, the first player picked is Brisbane Lions full-back Harris Andrews, who can control the game aerially – spoiling or marking – and poses strategic questions to coaches.

Haynes fills the intercepting role in one back pocket, the other taken by Richmond's outstanding Dylan Grimes – a quick tall who can play small, capable of manning Papley or Jeremy Cameron.

Collingwood's uber-athletic Darcy Moore has timed this year's out-of-contract negotiations better than he did in 2018 when he barely played. He edges out Gold Coast's ex-VFL backman Sam Collins at centre half-back. 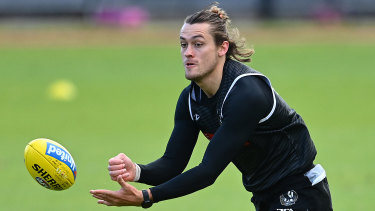 One running rebounding spot goes to Carlton's co-captain Sam Docherty, who has conquered a pair of knee reconstructions to solidify the Blues. The other half-back position was a raffle between several smaller defenders. I finally opted for Essendon's Adam Saad, on the basis of his run-and-parry. Collingwood's Brayden Maynard and Eagle Brad Sheppard were near misses.

James Sicily is a polarising player, due more to antics than output. A rare game-turning defender who plays audaciously, he has been given the defensive spot on the bench.

One of the stranger features of this strange season has been the scarcity of dominating midfielders.

In the absence of peak Cripps, Bont or Fyfe, the midfield positions were open for tenders. One successful bidder – the first to raise his hand – is Lions machine Lachie Neale, who shapes as clubhouse leader for the Brownlow.

Christian Petracca has made a convincing bid for a starting position; in another uneven season for the Demons, he has provided company for Max Gawn, turning from explosive cameo player into a raging midfield bull.

Gawn earns the ruck spot, by dint of his constancy. Brodie Grundy has been slightly below the Demons skipper, ditto the revived Todd Goldstein. At his zenith Nic Naitanui is a superior tap ruckman – witness what he did to Grundy last weekend – but hasn't been matched Gawn for consistency, either.

Wings are perennially problematic in AA teams. Do you fill them with genuine wings, or just hand the position to the best mids left?

This time, I've opted for genuine wings. Andrew Gaff is a bona fide wingman whose possession rate and ball use land him one wing, while the body of work from the Lions' Hugh McCluggage ensured he claims the other ahead of Essendon's Dylan Shiel(wing traits but not a real wingman) who had been brilliant up until his suspension.

Standing in the middle of this half-way team is the man who makes the earth stand still, Scott Pendlebury. We saw what Collingwood looked like without him last Sunday – shambolic. His leadership earns him the interim captaincy, though injury will make it difficult for him to get a seventh All-Australian guernsey come season's end.

Patrick Dangerfield is a handy bench player; if Patty, who often plays hurt, is a touch beneath his 2016-19 station, his work is still sufficient to make this side.

To complete a 22 that reflects modern positional reality, I've given the last place on the interchange to Fremantle's midfielder/forward Michael Walters, an exquisite double threat like Dusty.

For the Dees fans, Clayton Oliver's ball use is too poor for selection. To the Doggies' folk, yes, Jack Macrae was close. Saint Jack Steele, too, was considered, as was the most Tigerish of Tigers, defender Nick Vlastuin.

This team will change once this sawn-off competition concludes, whenever and wherever that happens. In a shortened, fast season of fast, short forwards, the only certainty is uncertainty.