Kevin Walters has delivered an almighty rev-up to his players in the dressing room before kick-off, all captured on dressing room cameras. That was something else. Imagine if his players knew how good his maths is.

We’re underway at Suncorp Stadium. I’m hoping for something of a contest, I’m not sure we’ll get it.

Nathan Cleary kicks off for the Panthers.

Are the Panthers arrogant?

Righto, few minutes away from kick-off. The biggest problem the Panthers have had this week is being labelled arrogant and cocky after their win over the Raiders. That goes to show how swimmingly things are going in the golden west.

The Broncos are getting a 27.5 start in most betting markets just to show how much they are considered outsiders tonight. I’m not even sure that’s going to be enough.

The Panthers to win by 32 with Stephen Crichton to be an anytime try-scorer. What are you predicting? 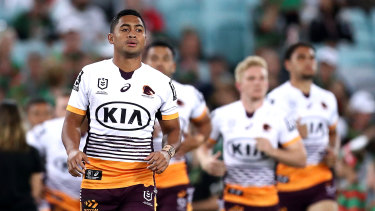 Anthony Milford has been dumped by Kevin Walters.Credit:Getty

Walters goes back to school to topple Panthers

“We’re round five of 25 so we’re one quarter [through],” he said. “If you look at a cake there is still three quarters of the cake to eat, so it makes me excited.”

Ummmm, anyway care to tell him?

I hope he knows how old Karmichael Hunt is. The 34-year-old is poised to sign a train-and-trial contract with the Broncos as he tries to resurrect his NRL career 12 years after he left the game for AFL and then rugby union.

Hello and welcome to another Thursday night football. It’s round six already. What do they say about time flies etc?

Anyway, I bet Kevin Walters is hoping time flies tonight. Because if it doesn’t then it’s going to be a long night for his poor old Brisbane Broncos. They’re playing the unbeaten Penrith Panthers.

I thought last week’s Bulldogs-Storm game was the biggest mismatch in NRL history … until tonight. Penrith are Winx-like odds. In fact, they’re shorter than Winx at $1.02.

You excited about tonight, Broncos fans? 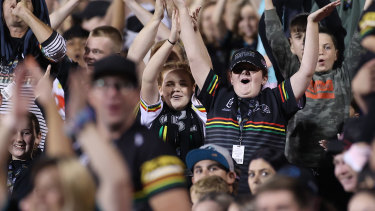 The Penrith Panthers are riding high.Credit:Getty