The Rugby League Players Association is expected to agree on Wednesday to an interim 75 per cent pay cut but has demanded an explanation from the NRL on how and when it intends to repay $10 million in redirected retirement funds.

The players are expected to agree to a basic deal on payment, which will guarantee them two months of wages over seven months, and will work through the details in the coming weeks. 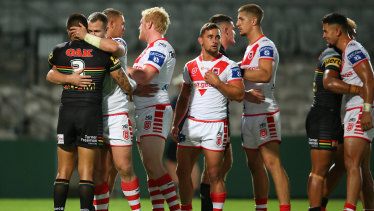 NRL players are set to accept a 75 per cent pay-cut proposal.Credit:Getty

It comes as the NRL accepted a loss of almost $75 million due to both Nine (the publisher of this masthead) and Fox Sports being expected to not make their quarterly broadcast payments on Wednesday.

The RLPA, which was waiting on final approval from all its players when this story was published, also wants to make sure it has a representative on the Wayne Pearce-led competition innovation committee, which will likely be formed on Wednesday. The committee will map out a potential 2020 season.

The main sticking point in discussions is around the retirement fund, with the RLPA seeking a guarantee and explanation on how the NRL plans to stump up the $10 million and when it will be in the fund.

Under the collective bargaining agreement, the NRL isn't required to have the funds available until the end of the broadcast cycle (2022), but the RLPA wants the fund topped up with the $10 million it has accumulated since 2018 as soon as possible. 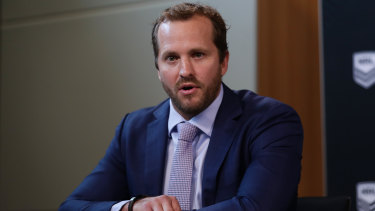 There has been speculation the salary cap could be drastically reduced in 2021, but RLPA chief Clint Newton said that may not necessarily be the case.

"The most important thing right now is the broadcast deal has been secured," Newton said. "Next year hasn't been impacted at the moment by the coronavirus. Around 65 per cent of the game's revenue is generated around broadcast, which equates to about $350 million or whatever. We know there may be a downturn in additional revenues through sponsorship and whatnot.

"As far as the whole amount is concerned, we need to have a good understanding of what is coming in and what is the players' share of that. At the moment, to the best of our knowledge, next year's broadcast isn't affected."