Rugby Australia and the Queensland Reds insist under-contract Wallabies star James O'Connor will be plying his trade in Australia next year, and not for a New Zealand club in Super Rugby Aotearoa.

A report in the New Zealand Herald on Friday revealed O'Connor was investigating the option of playing across the Tasman in 2021 and the 30-year-old's representatives had sounded out the Chiefs about lacing up his boots in Hamilton. 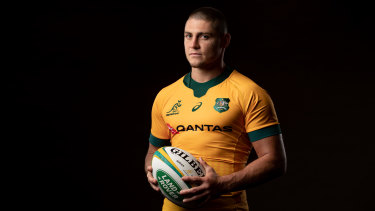 James O’Connor has become a Wallabies leader in 2020.Credit:Getty

The report said O'Connor had harboured an ambition to test himself in the “the world’s toughest domestic competition” next year.

The news came as a major surprise to Queensland, however, given O'Connor is contracted to the Reds and Rugby Australia until the end of 2021 and, furthermore, is a central part of coach Brad Thorn's plans for next year and beyond. The Reds have let rising playmakers Noah Lolesio and Carter Gordon move south in recent years.

After finishing up his Wallabies duties last weekend, O'Connor is on leave but the Reds expect O'Connor will return for duty in January ahead of the Super Rugby AU season which kicks off the following month.

"James is contracted through to the end of 2021 and is a big part of Dave Rennie's plans for the 2023 Rugby World Cup," a Rugby Australia spokesman said. 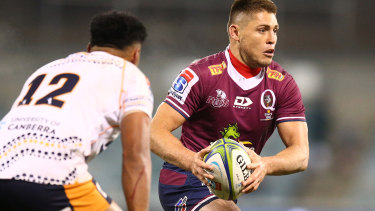 The Queensland Reds have put all their chips in the James O’Connor basket.Credit:Getty

A source with knowledge of the situation said neither Rugby Australia nor Queensland would agree to any request for O'Connor for a release from the last year of his current contract.

The report about a possible move by O'Connor to New Zealand came just days after a similar report emerged in the French press saying Toulouse were keen to get the ex-Toulon player back to Europe.

Sources told the Herald O'Connor's camp has not spoken with Toulouse but have held very preliminary discussions with the Chiefs about a possible transfer to Warren Gatland's team in 2022, not next season. 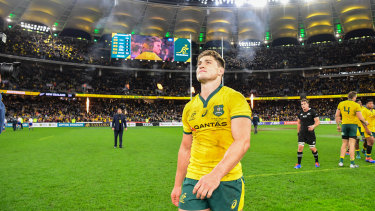 James O’Connor after Australia’s win over the All Blacks in Perth in 2019.Credit:Stu Walmsley/Rugby AU Media

O'Connor's parents are both from New Zealand and he has spoken to friends and teammates in the past about harbouring a desire to play for a Kiwi team one day.

Perhaps unsurprisingly, the contract chatter has heated up at a time when Rugby Australia and O'Connor are engaging in talks about a new deal that would take the 55-cap utility back through to the 2023 Rugby World Cup.

O'Connor signed a 30-month deal with Rugby Australia and Queensland in July last year after gaining a release from the Sale Sharks to pursue an ambition of playing at the 2019 Rugby World Cup.

Sources with knowledge of the deal – which was significantly boosted by Rugby Australia top-up money – say it was relatively strong, given O'Connor's history of off-field problems and after several years playing in Europe.

O'Connor returned triumphantly for the Wallabies last year, starring in the record win over New Zealand in Perth, and then in the World Cup.

This year, O'Connor has emerged as the first-choice No.10 for Rennie and with the departure of many other senior Wallabies, the former problem child has become a trusted, senior leader in the side.

Sources say it is this swift rise to prominence in the Wallabies system that is motivating O'Connor's camp to seek an upgraded salary, commensurate to his importance to Rennie and the Wallabies' plans.

Rennie and O'Connor have grown close this year and it is understood Rugby Australia and O'Connor's agent have already started talking about upgrading his deal, although no offer has been tabled.

Senior officials believe it is unlikely O'Connor would seek to scratch his New Zealand itch in 2022, for two reasons.

The first is O'Connor would likely have to give up on any involvement in the 2023 Rugby World Cup in France, given Rennie's stated preference to not use the Giteau Law and instead pick players who are playing.

The second is O'Connor would probably only earn about 30 to 40 per cent of his potential topped-up salary with Rugby Australia and the Reds were he to jump ship to the Chiefs.