Home » Rugby » Out but not down: Dees veteran to give all in fight to reclaim spot

Melbourne having a crack at a flag this season without Nathan Jones in the centre of the action would not feel right.

The champion midfielder reached 300 games against Richmond, then wore the medical substitute’s vest against North Melbourne – and was good when he replaced the injured Adam Tomlinson – before being an unlucky omission from the team that beat Sydney. 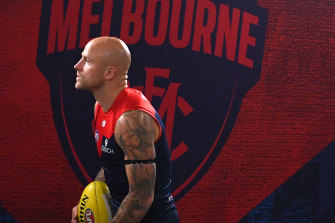 He misses this weekend with a hamstring injury so minor that his absence is precautionary as much as anything, but he is no longer an automatic selection while the only unbeaten team in the AFL remains relatively free of injury and keeps winning.

In some ways, the mini-reset might not be a bad thing because the Demons’ spiritual leader must be given every chance to be there in September when the whips are cracking, assuming Melbourne are good enough to finish in the top four.

Hawthorn managed to get Shane Crawford fit and firing for the finals in 2008 and the Demons could do worse than make it their goal to have Jones primed to play his role at the end of 2021.

Jones’ former teammate Daniel Cross has no doubt that the Demons veteran will be able to perform at the pointy end of the season as he is such a competitive person.

But he also knows that the 33-year-old will be rapt, regardless, that there is some light now for the football club he has led for so long through dark times.

“I am sure he just wants what is best for the footy club and I know deep down inside he will be giving it everything he has got because it looks like at this stage there is a fair chance [that Melbourne] are going to play finals,” Cross said.

“There is no doubt he won’t want to miss that because he has been through so many lows.” 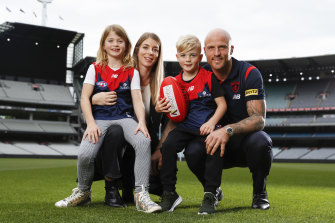 Nathan Jones with his wife Jerri and children Bobby and Remi ahead of his 300th game.Credit:Getty Images

Melbourne champion Robert Flower, who wore the same No.2 jumper as Jones, played his final match in the 1987 preliminary final which the Demons lost in heartbreaking fashion. He was 32 and Melbourne’s second-oldest player in the team was just 26 years old.

Jones is a warrior who will be playing every game as though it is last as he continues to keep his team (skipper Max Gawn has said this year that he can’t help seeing Jones still as his captain) on track to the premiership goal that they are all chasing with renewed fervour and discipline.

Cross, who was dropped when he played his final year at the Western Bulldogs before two strong years at the Demons, said there will be some challenging times ahead for those on the fringes of selection.

“You do have to get on with the job because, really, a lot of it is out of your hands and the only thing you can control is your preparation and how well you play,” Cross said.

‘He is just going to be fronting up each week wherever he plays and just giving it his absolute all.’

“When I was in that position that is all I ever thought about, preparing as best as I could for the team.”

That is all Jones will be thinking about now as his evolution as a leader and person has seen him put all his energies into performing the role required of him as best he can.

However, Cross says there are inevitably down times when doubt creeps in about making your way back, but professional athletes need to push through those moments.

“You definitely have your down times … as a professional you have to get on with the job, put a smile on your face and put your head down and keep charging along,” Cross said.

Having played mainly as a wingman who held his space, Jones’ versatility and resilience should be seen as a major asset for the Demons as he will be able to drop into any line – forward, mid or back – where a gap arises.

The Demons are happy right now to let the cards fall as they are and play what is in front of them, conscious of not trying to be too clever too early.

“He is just going to be fronting up each week wherever he plays and just giving it his absolute all,” Cross said.

But soon enough, decision time will be upon them and Jones must be in their thinking.