Home » Rugby » Out to sea: Meet the mega-fan who will watch Panthers 4000km from shore

There will be many Penrith fans sitting at home wishing they were at Suncorp Stadium on Sunday night, but there’s one who simply wishes he could watch the game on land.

Panthers mega-fan David Schubert has been out at sea since July 16. Collecting data for the government on fish stocks, Schubert set sail for his long trip in the Southern Ocean with one vital piece of clothing in his luggage — his Panthers jersey. 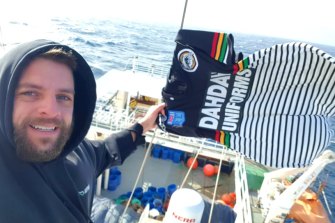 David Schubert will be off the coast of Heard Island at kick-off.

Despite having no idea whether his side would even make the grand final, Schubert packed all the merchandise he had just in case.

Now 4000 kilometres away from the action in Brisbane, he’s glad he did.

“I thought that I may be away for the final, so I packed all my gear and get it all out for each match,” he said.

“People [on the boat] think I’m a bit strange with it all, but I’m just a mad Panthers fan. So maybe I am.”

Without quality Wi-Fi on the boat, Schubert is unable to stream the matches.

He will be relying on video calling and his kids back home, who have planned to put the iPad in front of the television on Sunday so dad can watch along. Schubert will be just off the coast of Heard Island at kick-off.

“It’s pretty blurry, but I get to watch the games with my boy,” he said.

“I’m really disappointed that I’m not around for this part of the season, but I’m sending all my positive vibes across the ocean.”

Beating out Schubert by a few thousand kilometres is former Western Sydney resident Anthony Micallef, who has been sporting his Panthers jersey this week in Malta. 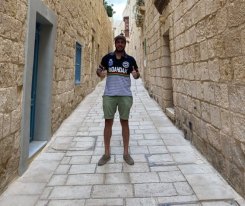 Three years ago, Anthony Micallef and his partner, Erika, became well known to most die-hard Panthers fans after getting engaged at Penrith Stadium.

Over 16,000km away, Micallef will be watching the game with his wife and one-year-old daughter, who he believes may be the youngster Panthers fan in all of Europe.

Micallef grew up in St Marys but moved to Malta in 2008.

Three years ago, Micallef and his partner, Erika, became well known to most die-hard Panthers fans after the duo got engaged at Penrith Stadium.

Micallef had brought Erika over to Australia for the first time, and proposed to her 20 minutes before kick-off during round one against the Eels in 2019.

“She said yes, she didn’t have any other option,” he said. “I’ve been a Panther fan since 1991 after I jumped on the premiership bandwagon as a nine-year-old and never got off,” he said.

“I didn’t miss a home game and travelled to most Sydney away games from the age of 15 until I moved to Malta at age 26.”