Tyrone Peachey sacrificed close to $100,000 to chase his NRL premiership dream at home in Penrith with his mates.

That is the whopping amount of money he relinquished after being guaranteed about $375,000 had he stayed for the second and final year of his deal with Wests Tigers.

The NRL needed to approve Peachey’s swap deal with Charlie Staines because he was giving up so much money. But Peachey could not be happier, even though the move is for only this season. He labelled Staines his “new favourite player” and said he was determined to help the premiers win a third straight title.

“I could have taken the easy option and gone to England, or sat back at the Tigers, but I took less to come here,” Peachey told The Sun-Herald.

“I want to work hard and see if I can get back to where I once was [as a player]. I took less money to try and win here and hopefully stay [beyond this year], if they want me.

“This is the club that gave me my first opportunity to be a consistent first-grader. It’s been awesome to see them succeed, and it’s now awesome to be a part of it again.” 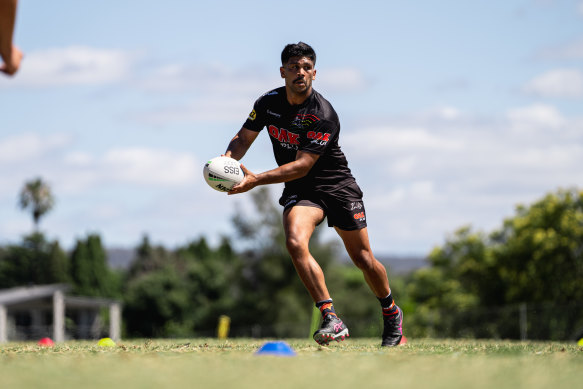 Back in black: Tyrone Peachey is excited to return to Penrith.Credit:Penrith Panthers

Peachey never fired on the Gold Coast after departing Penrith at the end of 2018. Before he left the Panthers, his form was such that he played all three games for NSW in 2018 as the Blues collected the interstate shield.

At Penrith, a lot of the players came through the same junior system. That was not the case at the Titans, where many recruits were given leadership roles before they were ready.

Peachey was in and out of the top grade during his one season at the Tigers, despite being in the leadership group.

“I didn’t play the footy I knew I could play,” he said. “I wasn’t in the mindset I should have been.” 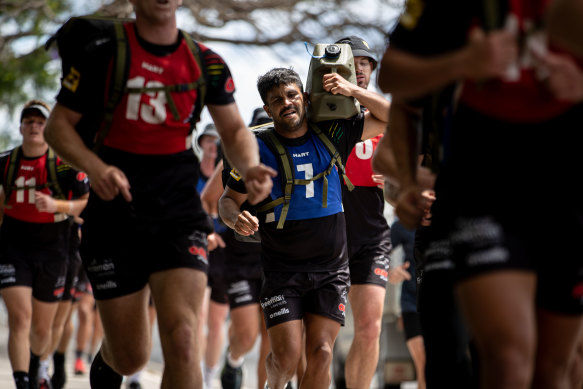 Peachey could not believe it when Penrith coach Ivan Cleary contacted him about a potential homecoming. Peachey lives a few streets away from the Panthers Academy, and he and Cleary are good mates. The coach attended Peachey’s wedding, and their respective wives were good friends.

“I wanted to give it one last crack here, finish strong and help this team win a third premiership,” Peachey said.

“Ivan has always been honest with me. He told me I hadn’t played good footy the last few years, it would be hard and, ‘I hope you’re ready for it’.”

Peachey has already lost six kilograms since weighing 97kg for day one of pre-season training.

“The last time I was at 91kg was when I was here [at Penrith],” Peachey said. “I’ve never hit triple digits. They train hard out here. I’m trying to get a bit lower again.”

Peachey can play in the centres, slot into the halves, fill the vacancy in the back row created by the departure of Viliame Kikau or prove a handy dummy-half option, especially with Mitch Kenny about to start his first full year as the starting No.9 following Api Koroisau’s departure.

Penrith love the fact he is an old-fashioned footballer who can hold his own in the starting line-up. Now 31, Peachey did not need reminding he is easily the oldest player at the club. He can still recall Nathan Cleary and Isaah Yeo making their first-grade debuts before going on to join the game’s elite ranks.