Members of Collingwood’s board last week called on president Mark Korda to stand down from the board at the end of the year to enable a peaceful transition to a Jeff Browne-led ticket.

Korda’s insistence that he remain president until at least Anzac Day, when he will have served 12 months as president, has become a stumbling block to a negotiated handover to Browne as president on his ticket of four, counting incumbent director Christine Holgate.

Browne will stand at the election with sources saying he would be joined on the ticket by two finance industry heads and would endorse the re-election of incumbent board member and former Australia Post CEO Holgate. 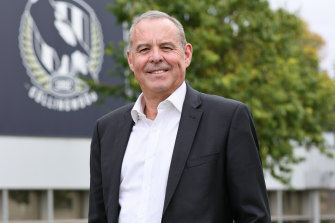 Barry Carp, the wealthy founder of venture capital firm River Capital, and APRA executive Renee Roberts are expected to join Browne in seeking election to the Collingwood board at the AGM in December.

Influential board member Peter Murphy, who served as co-president with Korda after Eddie McGuire’s sudden resignation earlier this year, volunteered at last week’s robust board meeting not to seek re-election to enable an easier transition to a new Browne board.

Murphy is a respected figure at the club and board members are reluctant for him to leave.

Korda has announced his plan to leave the board and the presidency at the end of next year when his term ends. He was asked directly at the board meeting last week if he would go this year to ensure a peaceful transition. Korda resisted the request.

Korda’s decision to step down at the end of 2022 has given impetus to a view from some directors that it should happen sooner for the club’s sake.

Other board members were posed the same question of whether they were willing to sacrifice their positions to make a compromise board easier.

Four of the seven current board members were to face an election at the annual general meeting: Murphy, Holgate, Neil Wilson and Bridie O’Donnell. O’Donnell has since quit the board and the board will not offer an endorsed candidate for her vacancy at the election.

Holgate is supported by Browne, but for Browne and his other two candidates, Carp and Roberts, to get on the board, two of the current board would have to be prepared to quit, or they would have to contest the election.

Club insiders believe Murphy would win an election, but neither Browne nor the board want a messy and divided board.

It is uncertain if Wilson, who was this year appointed to the board but due to a technicality on membership criteria is a non-voting board member until the election, would still seek to contest the election.

There is a suggestion Murphy could step away from the board, but seek election at the end of next year as a replacement for Korda.

The board had resisted the Browne challenge because it was predicated on him taking the presidency but equally the board had no one, other than Korda, who wanted to be president.

If Korda follows through on his plan to remain on the board for another 12 months, he faces the prospect of being voted out as president for Browne after the board election.