Collingwood will have the chance to explain to the AFL why Jordan De Goey and Jeremy Howe used their mobile phones during the Pies’ loss to West Coast on Friday night.

AFL integrity rules state that players cannot access their phones during games, even if they are out for the rest of the match injured, as was the case with De Goey and Howe. 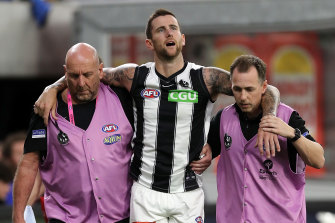 Jeremy Howe is helped from the field on Friday.Credit:Getty Images

Once the AFL receives that explanation the league will determine how to punish the players and/or club. The Pies have been pro-active in the matter and admitted the breach to the AFL the following day.

Collingwood captain Scott Pendlebury told reporters on Monday that the person who usually manages the locking away of player phones, football operations manager Nick Maxwell, was not at the game on Friday night.

“Maxy, our operations manager, wasn’t allowed to go to Perth because he had been in Brisbane and the role got lost in translation but we know as players we shouldn’t be on them during the game. We get educated enough about it, it was just a slip-up. 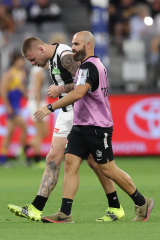 “I think if we get a warning, it’s a little reminder but if we get a financial sanction it’s a fair warning we shouldn’t be doing that. I am not too sure what those guys did but they sent a text back home letting their family know they were OK. We know we are not able to do that and I dare say for the whole competition the box will be locked at the end.”

Pendlebury also said the Pies, who sit at one win and four losses, were “not far away” from playing better football. They face a young and hungry Essendon side on Anzac Day on Sunday.

“I thought our last quarter [against West Coast] was really pleasing, showed some good fight … just probably those concentration lapses in the second and third, key periods where West Coast were able to get on top and they pressured us really well. Forced us to cough the ball up. I don’t feel like our best footy is too far away.

“Across the whole competition it doesn’t look like too many sides are flying and I understand it is important to bank points and we’d love to be 3-2 or 2-3 and three but I feel like we can string our best footy together and get on a bit of a roll. For us it starts Sunday and we have got to play a good brand of footy.

“They [Essendon] are a really good pressure side and we have got to be able to [withstand that].”

With Mark Keane suspended, Collingwood will have to shuffle key defensive and forward set-ups again. Pendlebury said Darcy Moore would have an impact wherever he plays – he was strong as a forward on Friday, kicking three goals – and that youngster Will Kelly was a defensive option following a strong VFL performance on the weekend.

Kelly has been considered a forward at the Pies since joining in the 2018 draft.

“It’s whether the coaches feel like they want to do that [persist with Moore forward] or put him back and bring someone else in … wherever Darcy is he has an impact,” Pendlebury said.

The skipper, who will play in his 14th Anzac Day clash on Sunday, said outside pressure on Nathan Buckley was not “water off a duck’s back”.

“You know it is going to come. We are just worried about playing a really good brand of footy and if we can … get some wins on the board I know that question goes away, off Bucks. We want to do it for each other, not just Bucks … because it is a better environment to walk into when you’re playing good footy.”