Home » Rugby » Pies, North at odds over Stephenson’s worth

North Melbourne has indicated an unwillingness to trade a first round draft pick for Collingwood's Jaidyn Stephenson, leaving the 2018 rising star winner's future unresolved as the trade deadline beckons.

The Kangaroos have spoken with Stephenson, who is yet to say where he is willing to join them. But their current stance on a first round pick – they believe Stephenson is part of a salary cap dump by the Magpies and would only offer a second rounder – is at odds with Collingwood's position, which is that it will take a first round choice, such as North's pick No.11, to get a deal done. 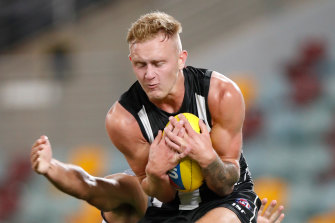 While the Magpies and North are some distance apart on Stephenson – who has three years to run on his contract – they are a strong chance to complete a lesser trade for Collingwood's rookie Atu Bosenavulagi, who made his debut in 2020 and might see better opportunities at another club.

A source close to the Stephenson discussions said the possibility of the forward leaving the Magpies was genuinely "50-50". Sources said North had not yet made a contract offer.

The Magpies are saying that they will not give up Stephenson without a first rounder and that he will be retained if they do not, in what will be test of how badly the club wants to shed the pacy forward, who booted 38 goals in his debut season to take out the rising star award before a 10-match suspension for gambling offences unravelled his 2019 campaign.

Late Wednesday, North was still unable to come to terms with Melbourne on a trade for key forward Ben Brown, with the Demons yet to offer the Roos one of their second round choices – a situation that surprised North, since Melbourne had three picks in that round including the one acquired from Greater Western Sydney for Braydon Preuss.

Collingwood had also expressed mild interest in Carlton's outside midfielder Lochie O'Brien, whom the Blues were willing to part with for the right deal, but sources familiar with O'Brien's situation said he was also a good chance to remain with the Blues.

Collingwood is also interested in trading their 2021 first round pick for a first round choice this year, in the knowledge that they will likely lose that 2021 pick in the bidding process for father-son recruit Nick Daicos.

Stephenson fell away after his immense promise in 2018 and for the early period of 2019 and was dropped from the senior side during the season before returning on the eve of the finals.

The Magpies also are still a chance to trade wingman Tom Phillips, who has a year to run on a relatively sizeable contract. North and Hawthorn have some interest in Phillips.