Saturday’s Rugby Championship Test between the Wallabies and Pumas is expected to go ahead on the Gold Coast despite six Argentina players and two staff members finding themselves stranded in NSW following a day trip to Byron Bay.

Officials have confirmed to the Herald and The Age that a group of players and staff made their way across the Queensland-NSW border on Wednesday to attend a health retreat in Byron Bay. 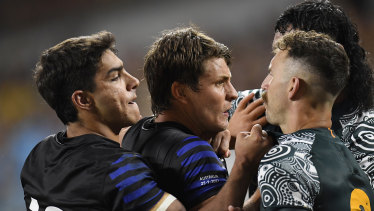 Argentina players during a heated scuffle in their 27-8 loss to the Wallabies on Saturday. Credit:Getty

The group were stopped at the border on Wednesday evening when they tried to return to Queensland and had to spend the evening at a hotel.

Individuals are only allowed to enter northern NSW for essential work, medical reasons or on compassionate grounds. The Pumas’ trip did not fall into this category.

SANZAAR, the governing body that runs the Rugby Championship, is expected to release a statement shortly.

However, sources with knowledge of the situation say the match is in no jeopardy, with Argentina set to name a full team of 23 players later today to face the Wallabies.

The Pumas have a big enough squad – believed to be around 40 players – to cover the loss of the six players who cannot get back into Queensland.

It is unclear whether the players and staff will be allowed to return to Queensland but the likely scenario is they would have to fly out of Australia from NSW.

Contrary to reports, it is understood captain Julian Montoya is not stuck in NSW.

The match on the weekend is Argentina and Australia’s final fixture of the Rugby Championship.

It comes just days after Pumas coach Mario Ledesma slammed Rugby Australia and SANZAAR for a captains’ photoshoot that went ahead without a representative from Argentina.