It’s uncertain whether Quade Cooper is a genuine chance of adding to his 70 Test caps on Sunday or if Dave Rennie is trying to sell the All Blacks the most public of dummies.

What’s far more certain is the imminent return of Izack Rodda, who fronted the press alongside the veteran playmaker in Perth on Tuesday.

Rennie is old school in the sense he views team leaks before official squad announcements in a very dim light.

It makes Tuesday’s offering to the press rather peculiar. If the Wallabies coach is set to make a shock selection and throw Cooper into the Bledisloe furnace in front of Noah Lolesio, it seems strange to tell the All Blacks about it 48 hours earlier than necessary.

A bench appearance, if he does feature in the 23-man squad at all, seems more likely.

With James O’Connor ready to join the squad when they fly to Queensland on Monday and Lolesio clearly still Rennie’s preferred choice at No.10, Cooper’s career at Test level is all but over. 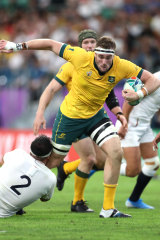 The same can’t be said of his former Reds teammate Rodda, who is set to complete a remarkable return to the Wallabies just over 12 months since turning his back on Queensland and Australian rugby.

Rodda, Isaac Lucas and Harry Hockings caused controversy last year when they refused to take a pay cut alongside teammates, due to the impact COVID-19 had on the Reds and RA’s bottom line.

But Rodda’s complaint was with Reds coach Brad Thorn rather than Rennie or RA. After 12 months abroad, he decided to return to Australia.

He signed with the Force for next season and, after spending time with the squad building on his fitness base, is on the cusp of adding to his 25 Tests.

“That’s why I’m back. It’s a dream of mine to play for the Wallabies,” Rodda said.

“Since being in France, I’ve learnt a lot more about physicality in the game and being more aggressive. I think that’s what I would be able to bring back after being in France … stuff around the breakdown and physicality, which I thought was my weaker point before I left for France.”

Rodda’s selection is made more likely by the absence of Lukhan Salakaia-Loto, who has returned to Queensland to be with his heavily pregnant partner.

That leaves Rennie with few options at second row, a position in which the Wallabies lack depth.

Darcy Swain and Matt Philip will almost certainly feature in the 23 by default and Rennie’s only realistic option other than Rodda is the uncapped Nick Frost.

While Rodda’s second stint in the Wallabies squad is about to begin, Cooper’s time at Test level will soon draw to a close.

The playmaker has already turned his mind to life after rugby, which may include coaching.

“When I was playing club football at Souths in 2018, that was probably the first time I actually really enjoyed passing on knowledge,” Cooper said.

“Before that, I didn’t really have the patience for it, at this level. Super Rugby and Test level, I would kind of get frustrated if someone didn’t understand their role or missed the jump on a play or forgot a little bit of knowledge because I thought you should automatically know it, being at that level.

“I think that was an error in judgement on my behalf; instead of putting in time and effort to help other people. Everybody learns in different ways and when I went to Souths, obviously a club that doesn’t have much resources, doesn’t have much money, the coaching around the players that came in – talented players – but they were raw.

“For myself – being fortunate enough to have great coaching, great resources and everything from such a young age – I was able to find patience in myself and things that I had learnt. That was the first time I really enjoyed and got more satisfaction out of seeing other players learn.”