The Saints sacked Ratten in shock circumstances in late October, less than 100 days after being re-signed to coach the club in 2023-2024. 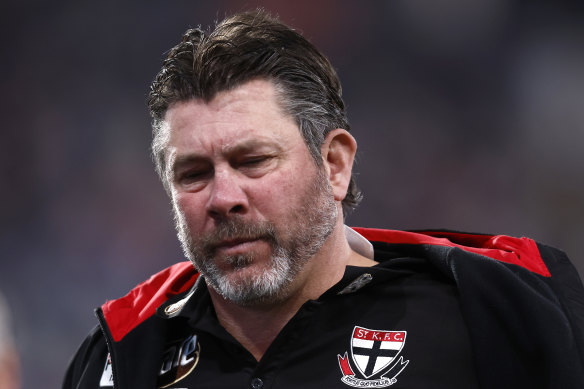 He was replaced less than a fortnight later by former St Kilda coach Ross Lyon.

Ratten was an assistant coach alongside Clarkson during Hawthorn’s premiership years between 2013-2015, having joined the Hawks soon after Carlton sacked him as senior coach.

He developed an outstanding reputation at the Hawks and left to join St Kilda in 2018 before taking over as the club’s senior coach in 2019.

A highly regarded figure in football, Ratten will work at the club a couple of days a week as well as on match day.

“Brett is a highly regarded operator who has been part of premiership success during his time at Hawthorn. His vast coaching experience will be a huge asset for our club,” Kangaroos football manager Todd Viney said.

The club is yet to fill their vacant CEO job with the final candidates expected to present before the end of this week. The Age revealed that Geelong football manager Simon Lloyd was a candidate for the role, and he remains in the running for the position.