Home » Rugby » Rise and fall: why Pies are most vulnerable, Demons on the up

After five months of being fed by their clubs a diet of hope and optimism, football fans are either constipated or hungry for the idea their team must certainly make the eight or, damn it, win the flag.

Clubs are better at sales than finals.

Before you fret about finals tickets and put your own team in the four, find a reason, any reason, that one of last year’s top four (Richmond, Geelong, Port and Brisbane) will drop out. It’s football’s Newtonian law – you can only rise if someone else falls. 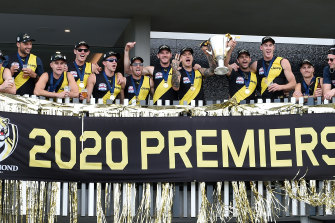 How long can Richmond stay at the top for? Credit:Getty Images

We’ll start with a few.

Reason one. The top four, like the top eight, normally changes from one year to the next. Usually, but not always. It’s a good history lesson that doesn’t tell us which teams will change, just that there is often a change.

Reason two. Last year was so bizarre and so necessarily compromised in terms of fixtures, venues, crowds and breaks between games that last year’s form line is meaningless. Brisbane, for instance, barely left Queensland. Reasonable point, but the best teams also were probably ones that overcame the hurdles best.

Reason three. Richmond are due to drop. This is the argument of the drought-stricken farmer – “it’s gotta break soon”. You wouldn’t bet on it.

Against those reasons for dropping are the reasons for the top four staying the same. One, Richmond show no signs of faltering. Furthermore, the rule changes appear likely to favour mature teams who can run all day.

The Cats? What more could they add? They got the best available tall forward, Jeremy Cameron, adding outside speed, from Isaac Smith, and midfield polish, from Shaun Higgins. Why would they be going anywhere?

Brisbane? They went and got Joe Daniher. Sure, he has barely played in three years and is fluky in front of goal, but when he is on …. OK, maybe I’m drinking the Kool-Aid now. Still, they look balanced enough across the field to hold their place. 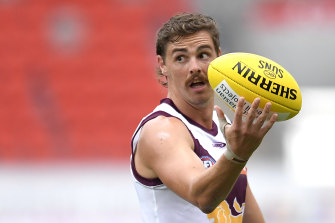 Port? Their kids are classy and now they’re stronger, fitter and better. Maybe the Charlie Dixon reliance is a vulnerability but I don’t see them dropping.

That leaves the other four spots in the eight. Who drops?

West Coast? Doubtful. They are hard to beat at home so that banks them wins. Josh Kennedy and Shannon Hurn started to look weary from age but then Nic Naitanui will be better for having a year back playing after his knee injury.

Saints? Possibly. Brad Crouch bolsters a consistent midfield spread. The worry is Rowan Marshall’s injury and the backline. Max King is the wildcard. He’s 20 now and inching closer to being a player who can single-handedly transform a team.

The Dogs? Very doubtful. Their midfield is elite and Aaron Naughton is as exciting a young forward as there is in the game. They picked up Adam Treloar, which adds pace to their midfield. The query will be giving all of their mids the on-ball time they demand (Josh Dunkley in part wanted out for this reason at the end of the year). 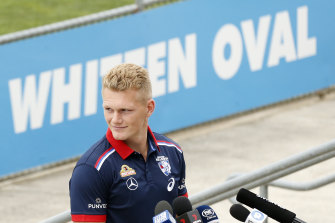 So that leaves Collingwood. Logically, they are the most vulnerable of the top eight having finished the home-and-away season eighth and then losing Treloar, Jaidyn Stephenson and Tom Phillips in the firesale.

Treloar leaving will hurt them simply because he was a good, point of difference midfielder. His ball use is not elite but his speed and line-breaking is. Stephenson and Phillips had no significant impact last year so losing them looks worse on paper than in reality.

Offsetting those ‘outs’, the Magpies barely had Steele Sidebottom last year, Jeremy Howe comes back from a knee and Brodie Grundy had a miserable time in the hubs. He should be better in a more normal year.

But still, goals. They can’t kick them. Until proven otherwise the Collingwood forward line is the Achilles heel that leaves them the most vulnerable side to be leapfrogged in the eight.

So who has the best argument to rise?

It should be Melbourne. They have class across the field. But again, who kicks their goals? Ben Brown? His knee is iffy and he needs to find a way to fit his game to Melbourne’s in a way he couldn’t last year with North. Sam Weideman? Tom McDonald? The Max Gawn-Luke McDonald rolling ruck-forward combo looks most dangerous.

What about GWS? It is hard to make an argument they will be better after losing Cameron and Zac Williams.

The Blues? Wouldn’t this be the yarn? They made canny additions with Adam Saad and Williams. If the pre-season games are anything to go by (and normally they’re not but stick with me here), and the home-and-away games are played open and fast, these two recruits could shape Carlton’s season. If only Charlie Curnow was ready to go.

Who else, then? Freo is the dark horse. Once the Dockers worked out how Justin Longmuir wanted them to play they were hard to score against and moved the ball well.