A match billed as a dead-rubber shone a light on the future of South Sydney with the club’s young guns impressing in a 20-16 win over the Dragons on Saturday night.

Lachlan Ilias, 21, scored on debut, Blake Taaffe was solid in his finals warm-up as he stood in for the suspended Latrell Mitchell, and 20-year-old hooker Peter Mamouzelos directed play with an experience beyond his years. 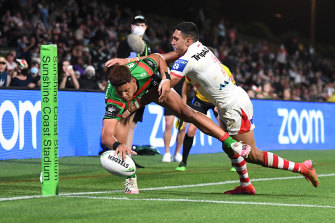 Jaxson Paulo crosses the line for the Rabbitohs, only to have the effort chalked off.Credit:Getty

It was the Souths youngsters who began brightest. There were no jitters from Ilias in his first NRL game, just plenty of enthusiasm as he opened the scoring with a fine solo effort. His short-kick was fumbled by the Dragons’ Mikaele Ravalawa and the youngster followed through, pouncing on the loose ball for the opener.

Just one year Ilias’ elder, Campbell Graham stole the spotlight by seizing on two more handling errors by the Dragons. The first, a dropped pass by Gerard Beale 20 metres out from the line, allowed Campbell a sniff of the loose ball and he raced away to score Souths’ second.

His next was even easier. Dragons fullback Tyrell Sloan couldn’t handle Benji Marshall’s high ball and Graham was there to plant it down, despite replays suggesting he may have pushed an opponent in the back off the ball.

Fullback Taaffe assumed kicking duties from the rested Adam Reynolds. Luck was his biggest foe, hitting the post twice as a lack of conversions kept the scoreline at 14-0 at the break. It was more respectable than the Dragons deserved.

The youngsters continued to impress for Souths after the break with Ilias and Taaffe combining to set up Taane Milne to score in the corner. Having been unfortunate with previous attempts, Taaffe nailed a conversion from the sideline to give the Rabbitohs a 20-0 lead early in the second half.

The Dragons took 69 minutes to get on the scoreboard with Sloan pulling one back, grounding Corey Norman’s short kick to make it 20-6. Sloan scored a second shortly after, bursting through a gap in the line to score in the corner. Ravalawa then ran over Taaffe for a try in the last minute to set up a tense finish at 20-16. It was too little, too late.

The only real concern for the Rabbitohs was a possible ankle injury for Marshall, who was withdrawn late, although the veteran didn’t look to be in significant pain.