Michael Maguire has never been afraid of change, but he has a week to work out what to do with two of the Wests Tigers’ most polarising figures: Luke Brooks and Joey Leilua.

Because if there is anything that sums up where the Tigers are at right now, then it’s their longtime No.7 and enigmatic centre who is playing for a contract – and his career – this season. 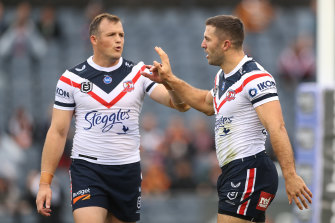 Tedesco’s former housemate was celebrating his 150th NRL game at Campbelltown on Sunday, and with one thumping tackle on the No.1 as he chased his own first-half kick, you thought he was up for the occasion.

In truth, there will be few happy memories.

In an interview with Billy Slater recorded for Nine before the big day, he spoke about the strength of his game being when he runs the ball. The few occasions he ran it against the Roosters he looked very sharp, the only problem was his leaden left boot sucked all the air out of two attacks with overcooked kicks and his defence alongside Leilua was exposed.

Then there was Leilua, whose younger brother Luciano lost his jersey at one stage when it was ripped from his back. Joey will be lucky to keep his next week with six misses from 16 tackle attempts according to Champion Data, although a shoulder injury to James Roberts might earn him a reprieve.

It got so silly by the end of the game Roosters prop Lindsay Collins found time to throw the last pass for two tries, including one for debutant Fletcher Baker, who had been on the field for minutes. Baker has only got his NRL shot thanks to injuries and suspension to Boyd Cordner, Jake Friend, Victor Radley and Sam Verrills, too.

Brett Morris didn’t even celebrate his second hat-trick in as many weeks, while Tedesco finished with a double and sideline conversion which allowed him to ham it up with the crowd who once adored him.

By the end of the first half the Roosters had scored three tries down the Brooks-Leilua corridor – and could have had even more. Morris got in on the act when he blazed past a scrambling Daine Laurie after a sumptuous Lachlan Lam tap-on and Sitili Tupouniua isolated Brooks from close range.

The Tigers stayed in the game at the break through Jacob Liddle’s scoot from dummy-half, and if it wasn’t for a leaden Brooks left boot – kicking two balls dead with Maguire’s side pressing – it could have been better than 18-6.

But the first points after the break iced the game as a contest, Luke Keary skinning Brooks and then throwing a flick for Morris’ second.