St Kilda will consider recalling former No.1 draft pick Paddy McCartin, but only if he's "100 per cent right" after recovering from his head injuries.

The 23-year-old has suffered eight concussions since 2014 and was delisted last year as part of a plan to put his career on hold until at least 2021. 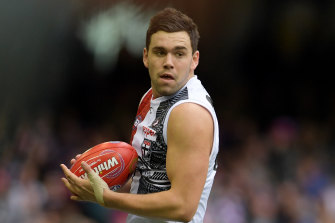 The Saints could pick up Paddy McCartin again.Credit:AAP

St Kilda coach Brett Ratten says McCartin's health is improving and he will make a decision about the player's future when the AFL resumes.

"Because of the isolation, we haven't seen Paddy for a while," he told Nine's Footy Classified.

"[McCartin's] been hitting the marks that he has to get on his testing so everything he's doing is really good and positive.