Home » Rugby » SBW: Aussies on the improve, but Kiwis still kings of rugby

Sonny Bill Williams is pleased to see a resurgence of Australian Super Rugby teams, including a happier Waratahs side who “shocked” him two weeks ago, but believes Kiwi sides are still the top dogs before a blockbuster round of trans-Tasman matches.

The Brumbies have won three on the trot against Kiwi opponents, while the Waratahs’ 24-21 victory over the Crusaders late last month, followed up by a hard-fought win over Moana Pasifika at the weekend, has given Australian rugby fans something to feel warm and fuzzy about.

However, the upcoming round will seriously test Australian teams, with the Brumbies hosting the Crusaders, the Reds making a trip to Auckland to face the Blues, before the Waratahs attempt to make it three straight wins when they tackle the Hurricanes at Leichhardt Oval on Saturday night.

A new dawn? Not just yet, according to Williams, the former All Blacks star.

“I think the Kiwis are still in a time and space of dominance,” Williams told the Herald at the launch of the Sporting Partnership Industry program on Tuesday at Accor Stadium. 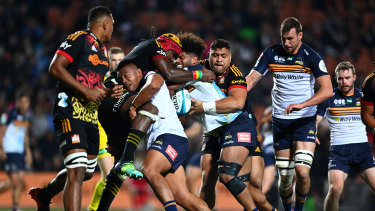 The Brumbies have dominated their Kiwi opposition this season.Credit:Getty

“But it’s always good to see the Aussie teams go well, in particular the Brumbies holding the flag high for Australian rugby. When I think of the big picture and rugby improving at an international level in Australia, you always want those Super Rugby teams to do well. It’s good to see.

“When it comes to Australia and New Zealand in any sport there is an added edge of not backing down and not wanting to surrender.

“Working with Stan Sport and seeing the struggles Australian rugby are dealing with at the moment, it’s great to see because you need these teams playing well to get eyes on the TV and more players playing the game.

“I think from the improvements we’ve seen at a Super Rugby level, it’s always going to translate on the international scene.”

If the Waratahs are to achieve their goal of a top-four finish and secure a home final, Saturday’s match against the Hurricanes, who are coming off a 67-5 victory over Fijian Drua, is a must-win.

“We are looking up [the ladder] and we want to see how far we can go and how deep we can get into this competition,” Waratahs prop Angus Bell told reporters. “We want to win it. It’s a critical game to our season.”

Williams said he has been particularly impressed with the Waratahs’ remarkable turnaround from last year’s winless disaster.

“Good on them,” Williams said. “[Coach Darren] Coleman’s probably brought more of a simplicity approach to the Waratahs and how they play and their structure. You can see the players just look happy.

“It was a great win against the Crusaders. I was shocked like a lot of others but it’s just good to see, bro.”

Meanwhile, Williams has given a big thumbs up to the news of Noah Lolesio’s re-signing with Australian rugby, but still hopes Quade Cooper gets a shot at No.10 against England in the July Tests.

“Him re-signing is massive news because I know he was getting massive offers overseas,” said Williams of Lolesio. “That’s big news for the Brumbies and Wallabies. You’ve got him there and James O’Connor too. You want him to come back into the form prior to his injuries.

“I know Quade loves playing for Australia. Hopefully they can come to an agreement.”