They arrived in Australia with dreams of winning an NRLW title, but three New Zealand-based players don’t even know if they will return home before Christmas after being caught up in a COVID-19 quarantine nightmare.

Charlotte Scanlan, Maitua Feterika and Katelyn Vaha’akolo are the faces of a postponed NRLW season, putting their jobs and families on hold to be part of Newcastle’s inaugural women’s team.

But after arriving in Australia seven weeks ago before pre-season training, the trio are becoming increasingly worried about when they will head home with the trans-Tasman bubble now shut and limited places in the country’s MIQ quarantine program.

They have been told there are no bookings available until December, but are sweating on confirmation some spots will be opened up on a first-in best-dressed basis next month.

It’s why they have been sitting in front of their computer madly refreshing booking pages, desperate to have certainty about returning home after coming for a job they weren’t able to do.

“We understand everything happened really quickly here with COVID evolving,” Scanlan said. “But we’re just stuck. That’s the hard part. We’ve got no control over it ourselves. We were the only ones that made it over [from New Zealand] in time – and then got stuck. 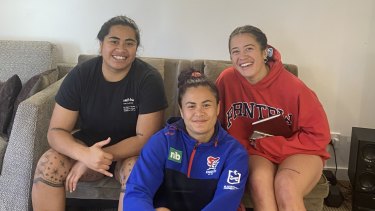 New Zealand-based NRLW players Maitua Feterika, Charlotte Scanlan and Katelyn Vaha’akolo are stuck in Australia after the postponement of the competition.

“We’re super grateful for everything we’ve been given, but like everybody we just want to get home as soon as possible. We know there are a lot of people trying to get home, but I suppose for us this was our job. We didn’t come for a holiday.”

The NRL is aware of the situation involving Scanlan, Feterika and Vaha’akolo and have been providing financial support.

The Rugby League Players Association has continued to make representations on behalf of the trio, hoping they can return to New Zealand soon.

Their permanent employers agreed to give them time away to be part of the NRLW season, which has been delayed until 2022. Scanlan works with the Warriors’ community arm, Feterika is a high school sports co-ordinator and Vaha’akolo is studying to become a teacher.

Knights coach Blake Green played a huge part in bringing the trio to Newcastle, likening their potential impact on the franchise to that of the New Zealand players who helped establish the club’s first men’s team in 1988.

The Knights’ Queensland-based NRLW players have been accepted into the state’s quarantine program and will be returning north of the Tweed.

Making the players’ experience even harder was the fact they unknowingly attended an exposure site after arriving in Australia and were temporarily forced into isolation.

“The Newcastle Knights have been really good to us,” Scanlan said. “We’ve had training sessions planned, special guests come in for Zooms and daily challenges. The culture within our team has been awesome, and it has definitely made it not quite as hard. 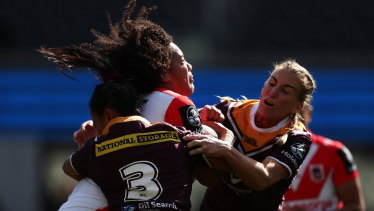 “It’s been a rollercoaster mentally because we’re trying to embrace Newcastle, it’s beautiful here. But we’re also stuck in limbo with work and planning ahead. We like to have organisation in our life and this whole process, we’ve had no control over which has been really hard.”

Feterika said she was “gutted” when all players and officials were told last week the competition wouldn’t be going ahead this year while Vaha’akolo, who only started playing rugby league last year, said it was the announcement was hard to digest.

“This is my first time coming into the NRL, and for me as a young person it was quite hard for [the competition to be postponed],” she said. “I’m lucky enough to be surrounded by these older girls, but it was definitely hard.

“My family has been really supportive, but I know they’re also gutted as well. They’ve put a lot of time and sacrifice into this.”

The NRL and RLPA had begun a vaccination drive among its elite female players with more than 80 per cent receiving at least their first dose before the season was delayed.

The NRL is expected to run two NRLW competitions next year, with the first starting early in 2022.