Home » Rugby » Scott Quinnell: The life and times of the cross-code star 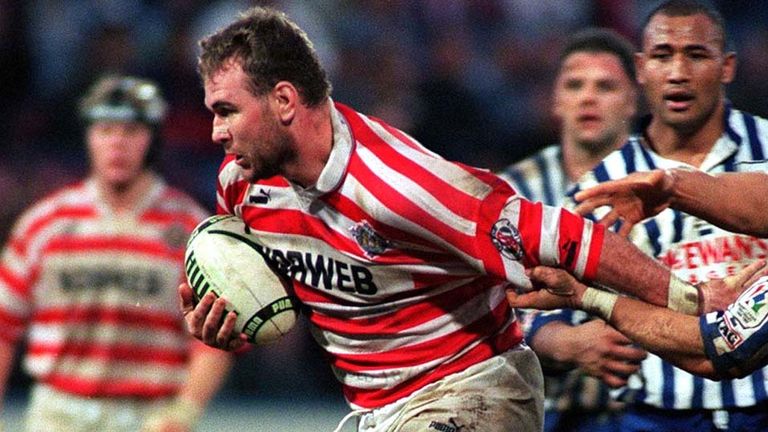 Scott Quinnell recently joined the Golden Point Daily podcast to reflect on his decorated career which spanned 15 years across both codes of rugby.

Speaking to former Wigan team-mates Barrie McDermott and Terry O’Connor, the Welshman revealed why he decided to switch to the 13-man code and recalls memories from his two seasons with the Cherry and Whites.

It was almost pre-ordained that Quinnell would enjoy a successful rugby career, with several members of his family having starred on the international stage for Wales.

Father Derek, uncle Barry John and godfather Mervyn Davies were all stand-out players for their country during Wales’ golden era of the late 1960s and 1970s, as well as earning Lions caps.

Younger brothers Craig and Gavin would both go on to play professionally as well, but when the elder Quinnell made his bow for Llanelli in 1990 the 15-man code was still strictly amateur.

However, he was tempted to join compatriots like Jonathan Davies, Dai Young and Scott Gibbs in ‘going north’ in 1994 – something which, at the time, meant being effectively blacklisted from rugby union for life. 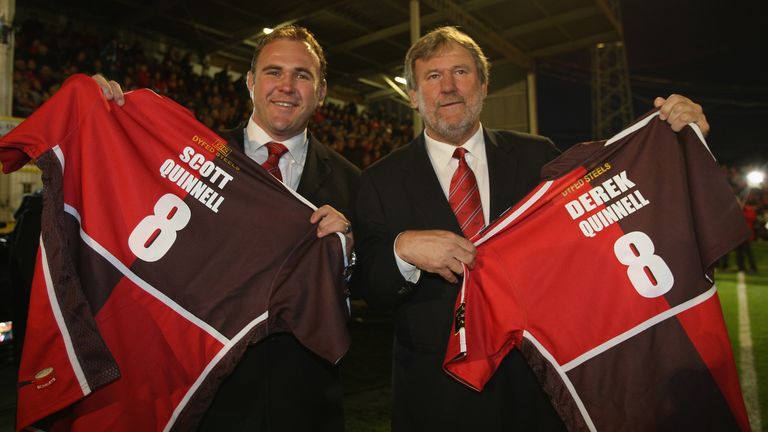 “It was one of those things where you had to make a big call because in 1994, it wasn’t like now where you can go back and forth between rugby league and rugby union,” Quinnell told Sky Sports. “It was incredible because you made that decision and you made it for life.

“But Wigan had just won the World Club Challenge, they had the best rugby league team I think I’ve been lucky enough to watch and they had an incredible team. I had an amazing two years there.”

Quinnell joined a Wigan side who were the dominant force in rugby league at the time, being picked by head coach Graeme West either at prop or in the second row after plying his trade in union as a No 8. 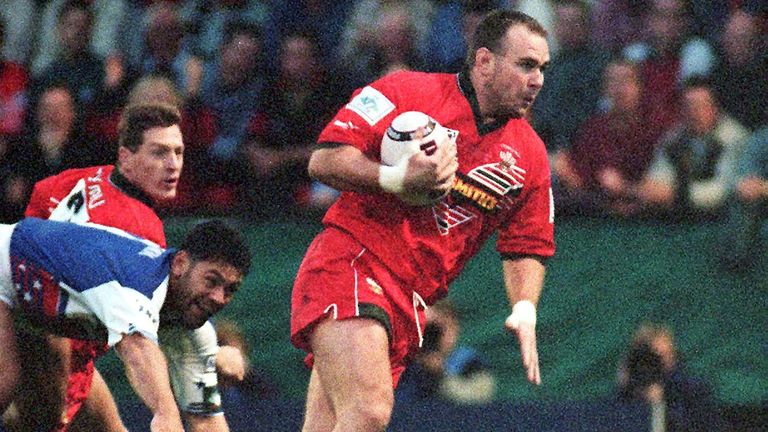 Wigan had just won the World Club Challenge, they had the best rugby league team I think I’ve been lucky enough to watch and they had an incredible team. I had an amazing two years there

During that spell he helped the club win two more league titles, along with playing a part in their 1996 Regal Trophy triumph and helping a Wales side packed with cross-code stars to the semi-finals of the 1995 Rugby League World Cup.

The supposedly clandestine nature of his contract talks with the club are one memory which particularly sticks out though, having originally been told to meet club director Tom Rathbone in secret near Wigan’s ground on a day they were playing Sheffield Eagles.

“They said ‘meet in the hotel opposite Central Park’,” Quinnell recalled. “We got up to the hotel and they said, ‘Mr Rathbone will meet you in the bar just around the corner’.

“So, we got in and it was packed full of supporters. Then they said, ‘Mr Rathbone will be coming and meeting you, and he’ll be in disguise’.

Promotional press photo of Scott Quinnell on the Central Park pitch after signing for Wigan pic.twitter.com/TNlE452Nom

“He turned up wearing a hat, a big overcoat and it was boiling hot! He snuck in, made sure it was us then went ‘oh great’ and when he took his coat off, he had a big Wigan rugby league badge on – and everybody knew who he was!

“I thought ‘we can’t keep it quiet and if I don’t like it up here, I’ve got to sign now because I can never play rugby union again!’ But I signed the following Thursday and was up there the following Monday.”

Call of the Lions

When rugby union was declared ‘open’ in 1995, it allowed players the freedom to move between the codes without fear of recrimination or being banned for life.

For Quinnell and several of his countrymen, it also opened the door to return to the code they had grown up playing after previously thinking they would never have that opportunity again. The chance to earn a place on the British & Irish Lions’ tour to South Africa in 1997 was what tempted him back to the 15-man code, joining ambitious club Richmond along with fellow Welsh league convert Allan Bateman.

“The only reason was because there was a Lions tour in ’97,” Quinnell said. “I was going back to play for Richmond who were then in what is now the Championship and it was that opportunity to get on the British & Irish Lions tour.”

Quinnell’s displays for club and country earned him a place in Ian McGeechan’s squad along with a number of other players who had extensive experience of the professional league environment.

“When I got on [the tour] they picked the likes of Dai Young, Alan Tait, Gibbsy and Allan Bateman – one of the greatest players I’ve played with,” Quinnell said. 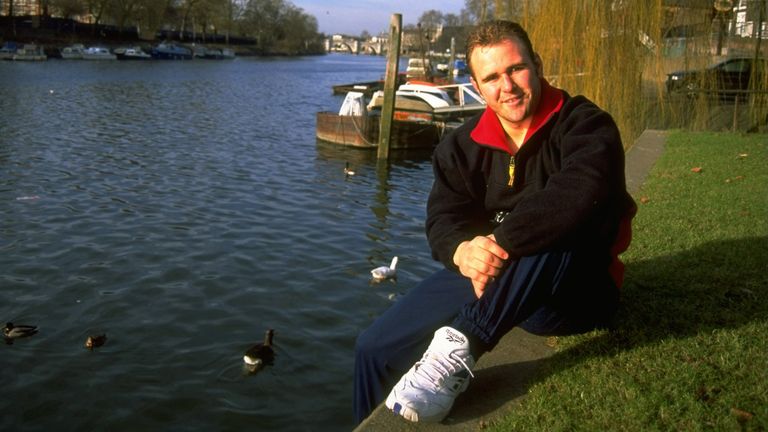 “They wanted an influence of professional players to bring on the tour because rugby union had only just turned professional at that time.”

But while the Lions would ultimately finish the tour celebrating a famous series win over the Springboks, Quinnell would not be part of it.

Quinnell started in the opening tour match, a 39-11 win over an Eastern Province Invitation XV and was in at No 8 again for the 35-30 loss to North-East Transvaal two weeks later.

However, he was suffering with a hernia and despite extensive treatment he was forced to make the toughest decision of his career, telling McGeechan he would be unable to continue on the tour. 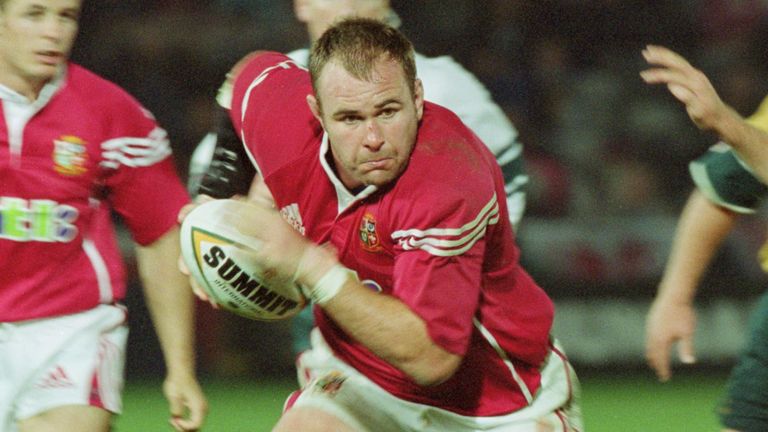 “It was one of those situations where it was incredible because I was on tour for five weeks and I had a hernia, and the hardest rugby decision of my life was to go and see McGeechan and tell him I’m not fit enough,” Quinnell said.

“I had two injections, I was taking painkillers and they’d worn off, and I said I couldn’t continue on that tour.

“I watched that Test series in a caravan in West Wales. It was a nice caravan, but it was heartbreaking because I wasn’t there with the boys just to celebrate that great success they had.”

Quinnell, who would eventually follow in his family’s footsteps and be capped by the Lions on their 2001 tour of Australia, was still celebrating that success back home though. And he was delighted to see Gibbs earn his place in history when the centre famously flattened hulking Springboks prop Os Du Rant during the series-clinching 18-15 win in Durban.