Should Geelong lose to Collingwood on Saturday, in what shapes as a genuine 50-50 contest, a sizeable, vocal section of the Cats' fan base will blame the coach, Chris Scott.

It won't matter whether they've had injuries during the game, if Tom Hawkins has kicked 0.5 again, if Paddy Dangerfield is subdued. The fault won't lie in the stars, in the eyes of many fans, who will be pointing to the defeat as another example of the coach's inability to deliver finals victories.

For a coach who has delivered a winning percentage of about 70 and a flag, Scott has a vexed relationship with Geelong supporters in an unusual dynamic that has been evident for some years. 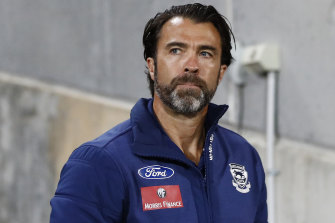 There is a clear divide between the Geelong hierarchy's view of their coach – which is overwhelmingly positive – and that of a hefty percentage of fans. It is hard to say what proportion of fans are in the anti-camp, but it is clear that they make noise and the club will be braced for a chorus of complaint if they go down to the Pies.

Scott's winning percentage is the highest of any (long-term) coach in VFL/AFL history, an astonishing record in a competition with a draft and salary cap.
But his finals record is unflattering since they won the flag in his first season. In the subsequent eight seasons, the Cats have won four and lost 12. From six top four home-and-away finishes post-2011, they've made four preliminary finals, but were a fair way off a flag in 2016 and 2017 and went out in straight sets in 2014, when their home-and-away record belied that team's real capability.

The anti-coach sentiment contains a few specific causes. One is the view, which some Geelong insiders don't completely buy, that Scott inherited a super list from Mark "Bomber" Thompson.

Undoubtedly, he did take the reins of a super team, which had under-performed in 2010.
Scott modified the game style – eschewing the kamikaze handball that Collingwood's forward press had undone in the preliminary final – and guided the Cats to a difficult premiership.

One of Scott's problems with supporters is that the 2007-2011 era represents a kind of Camelot, an idealised past that he is measured against.

Further, the unpleasant task of removing those beloved premiership players fell to Scott, who was mindful of his time at Brisbane and the way the Lions collapsed into prolonged mediocrity and worse after the 2004 grand final. 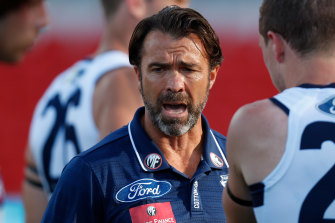 Chris Scott has led his side into another finals series but not all fans are happy. Credit:Getty Images

Naturally, these decisions created resentment from some players and the impact reverberates into the present; behind the scenes, a Geelong loss will invariably prompt harsh assessments from a portion of ex-players.

Scott is an articulate coach with good media nous, but he can sound superior and a touch narky when questioned – as he did when he deemed questions about the latest loss to Port "lazy journalism".

The reality of Geelong's finals record since 2011 is that the Cats haven't had the outlandish talent they possessed in the five years of Camelot. They've been propped up by Dangerfield's arrival and by their capacity to bring in seasoned players – and by the inspired recruitment of overlooked state league and/or local players, such as Tom Stewart, Tim Kelly and Freo discard Sam Menegola.

What they've lacked for a few years is elite, young, vibrant talent, of the kind that Port Adelaide acquired in 2018 with Conor Rozee, Zak Butters and Xavier Duursma, or the Brisbane crop that was harvested from finishing down the ladder.

Geelong has been unwilling to go down the ladder, in the manner of other sides, having missed the finals only once since 2006. But the list at Scott's disposal reflects those high ladder finishes: there's some decent players, but you don't get a King brother or Matthew Rowell at pick 15.

The most worrisome number about Geelong in this finals series is this: that they fielded the oldest team in the history of the VFL/AFL last weekend. The Tim Kelly trade, thus, is vital and the Cats must resist the temptation to trade those three first-round picks.

Rather than constantly whinging about the coach, those 'Never Scott' fans might consider the playing lists that the coach has had, compared to the clubs that have beaten them. Another comparison is in Scott's favour: the current positions of Hawthorn and Sydney, the teams that were Geelong's peers several years ago.

Geelong's finals record, which can still be redeemed somewhat this week and in a preliminary final versus Brisbane, should they get there, is more a case of a club and coach that extracts enough to win plenty of games, but isn't gifted enough to bring home the bacon that the fans crave.

Related posts:
Basketball News:
Newcastle owner Mike Ashley hits out at ‘unacceptable’ Premier League pay-per-view deal
Bartomeu REFUSES to quit as pressure mounts on Barca president
Pep Guardiola set to go a MONTH without Sergio Aguero due to injury
MLB News:
Rivera cheered at hospital as treatments finish
Monday Night Football FanDuel Picks: NFL DFS lineup advice for Week 7 Bears-Rams single-game tournaments
Odell Beckham tears ACL, Cowboys defense plays worse than Trump’s re-election strategy, and D.K. Metcalf wins the amazing race
Recent Posts
This website uses cookies to improve your user experience and to provide you with advertisements that are relevant to your interests. By continuing to browse the site you are agreeing to our use of cookies.Ok