Former Essendon football department boss Danny Corcoran says the supplements scandal was mismanaged at every level, coming as Kevin Sheedy called on the AFL to apologise for its handling of the saga.

Ahead of the club’s 150th anniversary celebrations against Carlton on Friday night, Sheedy has reopened the wound that remains the 2013 drugs saga when lives were ruined, friendships broken, careers irrevocably altered and premierships potentially left on the table in what remains one of the greatest scandals in VFL-AFL history.

In an interview with News Corp, Sheedy, the four-time Essendon premiership coach who wasn’t at the club at the time but is now a board director, also took aim at the federal government then led by prime minister Julia Gillard. 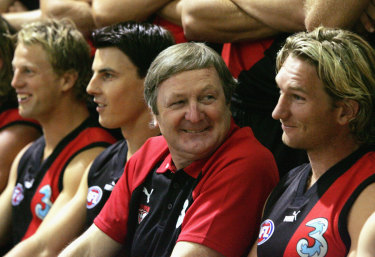 Coaching great Kevin Sheedy, now a board director, has reopened debate on the supplements scandal that erupted in 2013, the scars of which remain today. Credit:Getty Images

“The AFL should apologise … and they probably wouldn’t have the courage to apologise to Essendon. They were pathetic decisions of the past. I would think, when you look back, the AFL didn’t handle it very smartly,” Sheedy said.

“We were controlled by the government. There wasn’t one positive drug test out of that whole drug saga and hasn’t been for 10 years. All those players and everyone involved through that period suffered a penalty of suspicion.”

When contacted by The Age on Monday night, Sheedy backed his comments but wouldn’t elaborate.

The scandal led to the suspension of 34 Essendon players for 12 months in 2016, having been found guilty on appeal of taking the banned substance, Thymosin Beta-4, during the 2012 season, allegedly administered by then sports scientist Stephen Dank.

Corcoran, who was at the club in 2012 and was the football manager through the 2013 season, admits mistakes were made.

“We all think back in hindsight, the lack of supervision, the lack of reporting, all those sort of things, come to the fore. But they can’t prove we did take performance-enhancing drugs and we can’t prove that we didn’t. That’s the dilemma,” Corcoran told The Age.

“The handling and mismanagement on every level, including the AFL and ASADA, trying to deal with ASADA, trying to bully ASADA, they didn’t respond well to that. They became mortal enemies. People don’t know the whole story.” 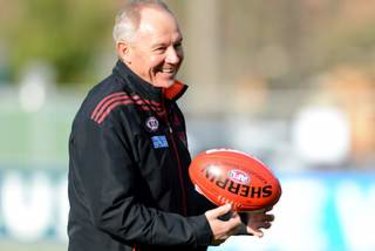 Danny Corcoran, the former Essendon football-department chief, admits mistakes were made in 2012 and 2013 but says there is no proof players were administered illegal drugs.Credit:Pat Scala

The 34 players involved were cleared in March 2015 by the AFL anti-doping tribunal but, less than a year later, the Court of Arbitration for Sport (CAS) upheld the World Anti-Doping Association’s appeal, finding “to its comfortable satisfaction” that the players had been injected with the substance.

However, that is not a conclusive result and, as Corcoran maintains, no one has been able to confirm what the players were given.

The saga sent Hird and lead assistant Mark Thompson into such depression that Hird ultimately attempted to take his own life, while Thompson also had well-publicised personal issues.

Jobe Watson had to return his 2012 Brownlow Medal, this contributing to the human toll that resulted from the August 27, 2013 findings by the AFL where Hird was suspended by the AFL for 12 months and Thompson was fined $30,000. The Bombers were fined $2 million and stripped of their first two draft picks for the 2013 draft and a second-round pick in 2014. Corcoran, for his part, remains bewildered as to why he was suspended for six months (two suspended) by the AFL.

“The whole thing unsettled so many players, families … there is still no evidence of any performance-enhancing drug being taken, and a lot of players and a lot of careers have been ruined,” Corcoran said.

“It was never, ever found. I don’t talk about it much but the hardline (stance) of CAS – we can’t prove we didn’t but you can’t prove we did – where does that leave anyone in terms of sport and the whole doping scenario? Under the current rules, you are guilty.”

Asked what he feels the players were administered, Corcoran said: “Everything from vitamins to immune boosters, which was approved.”

This included the banned anti-obesity drug AOD-9604, which Watson admitted to having taken from Dank under the impression that it was legal.

Corcoran insists the Bombers should not have self-reported on February 5, 2013, coming after weeks of speculation that the players had been administered illegal drugs.

The Bombers had even threatened to sue The Age the night before should any insinuations have been made.

Neither the AFL nor Andrew Demetriou, the league’s chief executive at the time of the supplements saga, wished to comment on Monday night.