Four-time Essendon premiership coach Kevin Sheedy will join the Bombers' board when outgoing director Katie Lio resigns from her position at the club's October 15 board meeting.

The club have turned to the legendary figure in order to help turn around the Bombers who are once again in turmoil with several star players wanting out and their on-field performance below par. 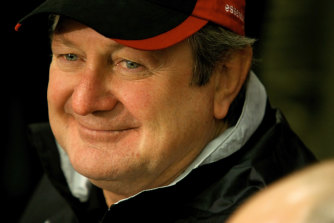 The Bombers have not won a final since 2004 – when Sheedy was still coach – and have had seven coaches (including caretaker coaches) plus coach-in-waiting Ben Rutten since Sheedy departed at the end of 2007.

In his time as coach he built the Bombers into a powerful club but they have struggled since they chose to return to a favourite son in James Hird as senior coach. The drugs scandal that rocked the club resulted in most of their list being suspended by the Court of Arbitration for Sport for the 2016 season.

Incoming president Paul Brasher said the Bombers had decided having Sheedy's presence on the board would assist the club.

"We have been talking with Kevin in recent months about how we might make better use of his experience and football knowledge to benefit the club and we agreed that the best way of doing this was for him to join the board," Brasher said.

"Kevin will not be involved in the day-to-day operations of the footy department, but with our football director, Sean Wellman, and club great, Simon Madden, Kevin will ensure we have a high level of rigour around our football discussions at the board level.

"He will also continue to be available in a mentoring capacity to Ben Rutten whenever Ben requires it."

The Bombers have several players unsigned and uncertain whether they want to stay at the club in Adam Saad and Joe Daniher, while other contracted players are unhappy.