Finn Russell will start for Scotland in their final Six Nations contest against Wales on Saturday.

Adam Hastings drops to the bench to make way for the fly-half, who will make his first Six Nations appearance this year.

Captain Stuart Hogg and second-row forward Jonny Gray return to the side in the wake of their double-winning exploits with Exeter.

Duhan van der Merwe drops to the bench following his try-scoring debut against Georgia, with Blair Kinghorn taking his place on the wing after vacating Hogg’s full-back position.

Scarlets No 8 Blade Thomson also comes in to start on his home ground in Llanelli in place of the injured Matt Fagerson, while Ben Toolis also drops to the bench. Racing 92 stand-off Russell fell out of the equation following a disciplinary issue ahead of the Six Nations in January but has repaired his relationship with head coach Gregor Townsend and made an impact off the bench in Friday’s 48-7 win over Georgia.

Townsend said: “It’s been great to bring in quality and experience to our starting line-up with players such as Stuart, Jonny and Finn who have been involved in some high-level games in recent weeks.

“We were also encouraged by Blade’s display at the weekend for Scarlets, which is a timely boost given last weekend’s injury to Matt Fagerson.” 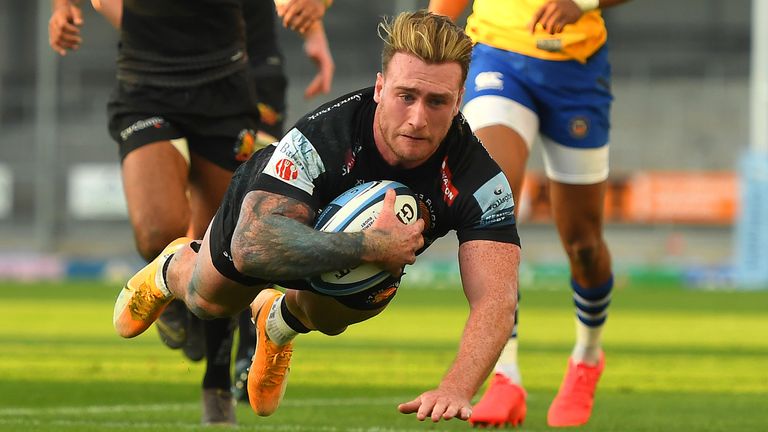 Townsend, whose side beat Italy and France after narrow defeats by Ireland and England, added: “As a group we are very much looking forward to finally completing our fixture against Wales and returning to play Six Nations rugby again.

“We were highly motivated back in March, and that extra edge has come back into our training and preparations this week.

“We are expecting a physical battle against a very good side, one which we will be working hard to stay in the fight and to finish the fight in Llanelli.

“Ultimately, this game provides an opportunity for us to end this extended championship on a positive note and go into the Autumn Nations Cup with some added belief in what this group of players can achieve.”