A six-week, 10-team trans-Tasman Super Rugby competition is days away from being signed off by Rugby Australia and New Zealand Rugby powerbrokers. 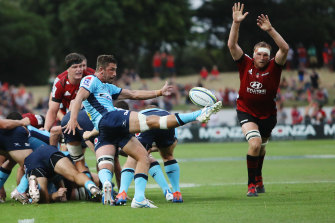 Jake Gordon and the Waratahs will again face the best of New Zealand next year.Credit:Getty Images

The financial windfall from the increase in home games – combined with the new $114 million broadcast deal – will give the clubs a chance to keep their heads above water in the midst of the COVID-19 pandemic.

"You just have to watch the [Bledisloe Cup] game here on Saturday where we had 38,000, which was close to COVID capacity.

"Trans-Tasman is absolutely the right future for us and I know we're excited to have the Kiwi rivalries in there and to test ourselves against the best teams in the world. That's what people want to see."

While the full trans-Tasman draw is expected to be revealed either at the end of this week or the start of next week, RA unveiled the Super Rugby AU draw on Wednesday.

Queensland will play six of their 10 matches in the live free-to-air slots and NSW have been given five prime-time spots.

The Brumbies, despite being reigning Super Rugby AU champions, will play four matches in the coveted slot, the Rebels will play three, while the Force will feature just twice.

"There's compromises across the board but overall, we're happy with the draw that's been put together," Brumbies chief executive Phil Thomson said.

"We understand the reason behind the way the draw has eventuated through Nine and what their requirements are. At this stage, we can live with the four games on free-to-air on the Saturday night."

All bar one match shown on Nine will feature a traditional heartland state. The only game that won't is the round-three clash between the Rebels and Brumbies.

"Clearly there has been a couple of iterations before today’s final arrangement and I think from our perspective we’re very happy with the way it’s landed for us as a business," Waratahs chief executive Paul Doorn said. "But also for how it looks for the team. Really delighted actually."

The Reds and Waratahs will also have the honour of being the first two Super Rugby teams to feature live on free-to-air television when they open the season on Friday, February 19.

That night will feature a double-header to kick off the season, as the action will then move west, where the Force will host the Brumbies.

At the end of the 10-week season, the team that finishes on top of the ladder will progress straight through to a home grand final.

The second- and third-placed teams will then square off, with the winner progressing to the decider, as was the case this year in the inaugural Super Rugby AU.

*All kick off times to be confirmed

Related posts:
Basketball News:
Chelsea’s ‘exploitation’ over £75 tickets vs Leeds outrages Supporters’ Trust
Envoi Allen bids for Drinmore success
Klopp makes Liverpool defender admission after selecting Phillips over Matip
MLB News:
Ferentz scoffs at Huskers’ gripe over Iowa claps
Terry McLaurin on game-changing tackle: 'It's a different type of mentality'
NFL Week 12 guide: Picks, bold predictions and fantasy nuggets for every game
Recent Posts
This website uses cookies to improve your user experience and to provide you with advertisements that are relevant to your interests. By continuing to browse the site you are agreeing to our use of cookies.Ok