Home » Rugby » Slipper a man of action, not words, before Bledisloe Cup opener

For the best part of 20 years, the Wallabies have talked about wanting to win back the Bledisloe Cup.

They’ve sold the dream to long-suffering fans, insistent that a breakthrough series win was just around the corner.

Players have craved the chance to find out how many cans of beer it takes to fill the famous cup that symbolises uncompromising and brutal rugby contests between Australia and New Zealand.

However, on the eve of a blockbuster two-Test series, beginning in Melbourne on Thursday night, Wallabies skipper James Slipper opted for a change of tack before the captain’s run. Throughout his career, Slipper has preferred action over words.

“It’s been 20 years and I’ve never won it,” Slipper said. “It’s one thing talking about winning it, it’s another thing doing it.

“I’m not really interested in going down the path of [saying], ‘We’re gonna go out there and win’. We got to make sure we do it on the field instead of here in front of the media. We’ve got a couple of boys born the year we last won it. It’s a long time.” 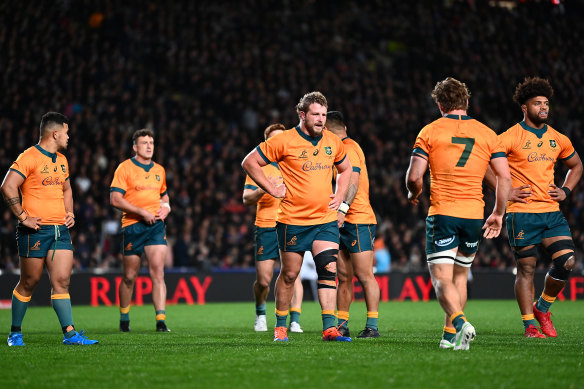 James Slipper (centre) and the Wallabies after last year’s loss to the All Blacks at Eden Park in Auckland.Credit:Getty

Rugby Australia was quick to announce on Wednesday the final Wallabies match on home soil this year, at Marvel Stadium, had sold out. RA did the same for the opening rugby international at Allianz Stadium almost a fortnight ago, but most of the 38,000 fans left feeling disillusioned with the Wallabies after a 24-8 loss to the Springboks.

The Wallabies need no reminding about the enormity of the task at hand or the broader context of what a win over the Kiwis would mean. Losing the deciding Test to England in July has compounded that.

“We understand how big these games are,” Slipper said. “At the end of the day, we want to inspire rugby players around the country. We’ve got a job to do, we know that.”

The obligatory “tough reviews” and “honest conversations” after a loss have been completed. All the work is done.

Two weeks ago, quiet questions were being asked about whether this was really the year the Wallabies could win back the Bledisloe Cup for the first time since 2002. That was before New Zealand’s 53-3 spanking of Argentina. Still, six losses from nine matches is almost unheard of for the All Blacks.

However, Slipper played a straight bat to a question about whether this might be the Wallabies’ best chance, in recent times, to regain the Bledisloe Cup last lifted by George Gregan.

“I’ve heard that commentary a fair bit, but history tells us that they’re a pretty hard team to beat,” said Slipper, who has chalked up four wins from 28 Tests against the All Blacks since 2010.

Australia have won their opening Bledisloe Cup match on just two occasions in the past 13 years, while New Zealand’s 16 victories against Australia in the past 20 Tests between the sides have been by an average margin of 24 points. 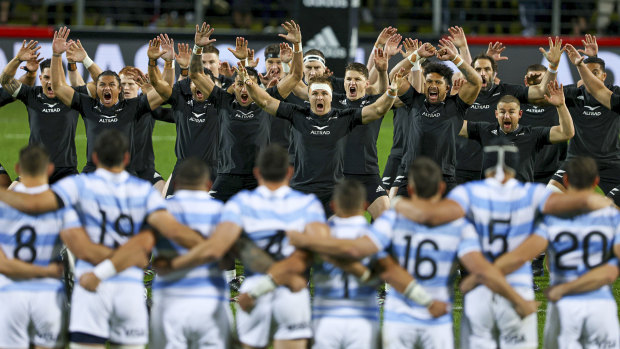 New Zealand perform the haka before smashing Argentina in Hamilton.Credit:Photosport

“Historically, they have had the wood on us for 20 years,” Slipper said. “We understand what’s coming, and it’s going to be a hard task to win the Bledisloe.”

“They’re a good team. They’re a big rugby nation. There’s a lot of pressure on their outcome,” Slipper said.

“There’s been a lot of closing of the gap between southern and northern hemispheres. I’d probably say the top six to eight teams are pretty close.”

There are concerns the Wallabies have made too many changes to their starting side – eight in total – to have enough cohesion to break down the All Blacks. Bernard Foley is steering the ship at No.10 in his first Wallabies outing since 2019.

“The start of the game [is important] and then just the basics,” Slipper said. “So your set-piece, kicking game and then just working on your discipline. We’re probably the worst team in terms of discipline at the moment … we haven’t had a response from the players.”

The Wallabies have conceded 14.5 penalties a game in The Rugby Championship. It was then put to Slipper he was the most penalised player in the competition.

“It’s not ideal,” he said. “We spoke about it a fair bit and we’ve had honest reviews over that and being a captain, I’ve got to lead by example there and pull my head in.”

A loss in Melbourne would make next week’s trip to Auckland even more daunting for a Wallabies side that has not picked up a win at Eden Park since 1986 – three years before Slipper was born.

But a win? Let’s not go there, just yet.

Watch every match of The Rugby Championship on the Home of Rugby, Stan Sport.