Home » Rugby » Smith, the kid with the mullet, learns to relax

Bailey Smith is hard to miss. He's often in the thick of the action around the ball, even in the company of Marcus Bontempelli and Jack Macrae. He's fast, powerful and has a sidestep worthy of the Wallabies.

And then there's the hair. Smith has one of the AFL's most spectacular mullets, one so untamed – longer at the sides than Billy-Ray Cyrus in his Achy-Breaky Heart heyday – that he draws the eyes of fans and the television cameras.

Smith, just 19, reckons his haircut – rivalled by teammate Aaron Naughton's mullet – draws "mixed responses" from those who critique it, but it's something he treasures. 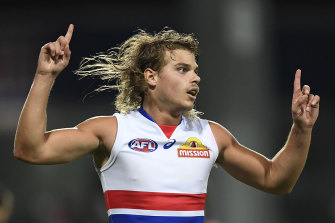 Bailey Smith wasn’t allowed to grow his hair out at school. Credit:Getty Images

"I mean I love it and it's something I've always wanted to have, is a nice little mullet. I haven't been able to grow it out because school [Xavier College], when I was younger, they wouldn't let me.

"I haven't shaved my side in ages because I don't know if I should grow it out or not … I haven't got around to it."

Smith stands out for his eye-catching style, and he stood out as a youngster in the draft of 2018, when he was viewed by some recruiters as almost too devoted to football, to the point that he needed to relax.

"Yeah, that's fair," Bailey said of his extreme devotion to footy in his draft year at Xavier. "It's cooled down a little bit since then, I've learned to, you know, find a bit more of a balance."

In his second year, as he's advanced, Smith has also had to deal with the constancy of football when living in the club bubble on the Gold Coast for much of this pared back season.

He misses his parents, "a little bit, but, you know, like I'd rather be up here, I suppose. I miss my dog more".

Switching off has been a challenge.

"Up here trying to switch off is tough at times … it's hard to get footy off your mind. But you sort of try and find little tricks throughout the day," he said.

"I've got my girlfriend up here, which really helps. And like I go to the beach for a bit of a swim, bit of golf, you try and relax that way. Yeah, it's hard still but you learn more about yourself every day." 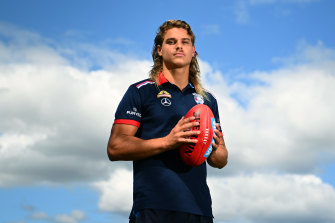 Smith also learned from the Lachie Hunter episode, when the then vice-captain crashed into four parked cars and recorded a high blood alcohol reading. Smith, who was nearby at his girlfriend's place, drove Hunter to another teammate, Billy Gowers' place.

The club made no sanction against Bailey, but he was fined for breaching the Victorian government's COVID-19 social distancing regulations.

Smith reckons the episode was something of a "wake-up call" to the team.

"Obviously, it wasn't fine, but it was, yeah, something I had to go through. But, you know, Lachie and I have both learnt from that and, yeah, it was something we leave in the past and move on," he said.

Smith said he had copped "a little bit" of criticism. "But it's nothing major … It was just what it is. Yeah, Lachie's learned from that and he's killing it at the moment," he said.

Smith's role is to provide speed on the outside alongside ball-getters Bontempelli, Tom Liberatore and Macrae, noting that "you can't all fight for the same footy" though he knows he must burrow in when it's his turn.

"You've got great players, who are great at getting that contested ball. I'm probably a bit quicker and a better tank on the outside, so it's play to your role," he said.

Entering this elimination against St Kilda, Smith twice mentions that the Dogs have the capacity to "do some damage" in the finals, if they bring their best version of themselves.

Luke Beveridge's message, he said, was not to take this finals appearance for granted.

"For us to claw back the way we did, to get in there at seventh, was a big achievement … But as well as that, you know, looking at this week, let's make the most of it … let's try and do some damage in the finals."