The All Blacks are eyeing Blues recruit Roger Tuivasa-Sheck as a potential number “12 or 13” in the clearest indication yet they see the former Warriors league great as an option for the 2023 Rugby World Cup.

Tuivasa-Sheck made the shift to rugby after a stellar NRL career and although COVID-19 and Auckland’s associated lockdown derailed his plans to play for the Blues in the National Provincial Championship, All Blacks coach Ian Foster said his interactions with the 28-year-old had convinced him he could succeed. 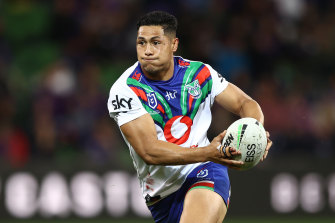 Roger Tuivasa-Sheck is already being eyed by the All Blacks after his code switch.Credit:Getty Images

“Once he’s back playing, we’re confident that Roger will pick things up very quickly because his desire to know … has been outstanding,” Foster said. “He’s very motivated.”

Tuivasa-Sheck has been an elite NRL player for years, but no one underestimates the challenges faced by athletes moving from one code to another. Debate, therefore, has focused on what position Tuivasa-Sheck will play in Super Rugby Pacific with the Blues. Foster sees him as a “natural” fit in the centres, although not right away.

“It’s a tragedy he couldn’t get some game time for Auckland, to use it as a growth point,” Foster said. “But I’m sure his time at the Blues will be great. I do see from a positional point of view him probably transitioning into the outside backs first and foremost, and then moving into the midfield with some of the skill sets he’s got. He’s a strong player, great feet and, as he grows his passing, either 13 or 12 fits naturally for him long term.

“The good thing is that by starting on the outsides, he’ll get a good read of the game and probably pick things up quicker and still have a large part to come in and inject himself, depending on game plans.” 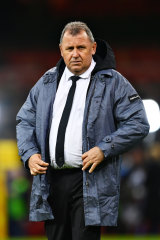 “He’s a strong player, great feet and, as he grows his passing, either 13 or 12 fits naturally for him long term.” Ian Foster on Roger Tuivasa-Sheck.Credit:Getty

Tuivasa-Sheck’s switch will be managed by the Blues with input from the All Blacks, making it crucial there is a degree of alignment on where both parties see him.

Former NRL star Sam Burgess famously played at breakaway for his club, Bath, and in the centres for England when he switched codes for the 2015 Rugby World Cup. New Zealand’s system should make sure such pitfalls are avoided.

“New Zealand’s obviously a big part of the recruitment process with Roger, and that’s the great thing about New Zealand rugby,” Foster said. “Conversations occur, and we are involved, and I’m involved, and New Zealand would want to know my opinion of the player.

“I was able to meet the player and he was able to meet the franchise [the Blues] he was keen on playing for, and he’s had a number of conversations with me over the past six months and with Leon [MacDonald, Auckland Blues head coach]. So, I think there’s good connection there.

“But what we’ve learnt in the past is that it’s not a matter of somebody being right. With a case like this the question is to make sure that everyone is talking about what can we do to give Roger the best chance of succeeding.”

The intriguing thing about Tuivasa-Sheck’s switch is he may end up playing in the midfield beside Rieko Ioane – a huge show of faith in his ability as a centre.

That partnership would excite Blues fans and potentially accelerate Tuivasa-Sheck’s development. But Foster said he remained flexible about Tuivasa-Sheck’s position and was happy to see him progress gradually.

“I’ve got no fixed ideas, but I know there’s some skill sets that he can develop, and he knows he can get on the phone and chat about it with me,” Foster said. “We can just take it one step at a time and I’ve got complete faith in Leon and his team that once he gets in [at the Blues] we can keep an eye on what they’re doing and we can be part of the conversation about what’s happening.”