Maroons team is IN

No surprises, Ben Hunt 18th man, I’ve actually tipped Val Holmes for man of the match at home. I feel for the kid.

The Maroons looking very much at home

That’s because they are… if you think Brisbane is ultra-Qld, then Townsville is that times 10.

However, in terrible signs for the Maroons, I just got up to go to the kitchen and the dog ate my glasses. They are now done for the night. I did not have a contingency plan in place.

Anyway, here’s Joey talking about Cameron Munster, who is sensational and won’t be wanting to be overshadowed by a rookie opposite number.

Ivan Cleary couldn’t get a flight to Townsville to watch his son and players. Here’s his take

I spoke to Penrith coach Ivan Cleary before kick-off. He’s watching it at home, while his wife and eldest daughter are in Townsville. He couldn’t get the right flights to make it up and back and not impact on the Panthers’ training schedule. Here’s his take on the game tonight as he watches six, potentially seven if Koroisau gets on, in the opening game of the series.

What’s going to happen with the high-tackle crackdown?

From Queenstcowboy on SMH: Do you think the players have adapted to the high-tackle crackdown or will we just see more sin bins/penalties in Origin like we have in the NRL?

Chammas says: “My mail is that the NRL will be happy if accidental head contact is placed on report and dealt with at a later date. My take on it is that players won’t be sent from the field unless the contact is reckless and forceful. Time will tell. Hopefully they can apply some common sense to the edict and the spectacle isn’t ruined”.

Reader Q&A: Where are we at with television rights?

From Ben Costelloe on Twitter: Are the free to air TV rights currently being negotiated? Or is the NRL’s plan to start negotiations after Origin and the 2nd Brisbane team are announced?

Chammas says: “The NRL has opened dialogue with new Nine boss Mike Sneesby but they haven’t sat down yet to talk serious business. Interesting to note that Sneesby is with ARLC chairman Peter V’landys in Townsville tonight. Things will start to heat up in the next few weeks. No doubt the success of this year’s Origin series will impact how much Nine will want to fork out for exclusive, premium content. Ratings have been on the slide as shown in previous post.”

Another question from our readers: Are Queensland cheats?

From russmurphy on Instagram: Will Queensland cheat yet again after getting 2 games in a row at home?

Chammas says: There’s no doubt the Maroons have a huge advantage with back-to-back games to open the series. Don’t think there’ll be any cheating but I have a sick feeling the main talking point out of the game will be the gamesmanship and whether players have stayed down to milk a penalty. Hope I’m wrong and the gentleman’s agreement Daly Cherry-Evans proposed is followed.

We preview game one, talking Townsville, Cameron Munster and who gets on top and why… have a listen. 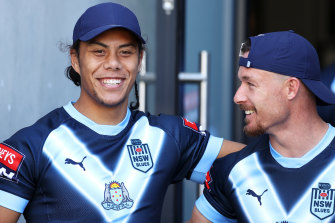 Reader Q&A: Should Origin be played at the end of the year?

From rabbitstew on Instagram: Why don’t they play it at the end of the season? Worked last year.

Chammas says: The television ratings were terrible. The NRL wanted to keep it at the end of the year but they had no choice but to go back. I think the viewers and players were burnt out by the time Origin rolled around at the end of the season. Have a look at the ratings below.

Readers’ Poll: How will the high tackle crackdown impact the game?

Here’s everything you need to know about Game I

Although I am sceptical of the kick-off time, all the SMH experts have had their say on the man of the match, first try scorer and the outcome. You will all be stunned to know that NSW are favourites for this one. Are they ever not favourites? 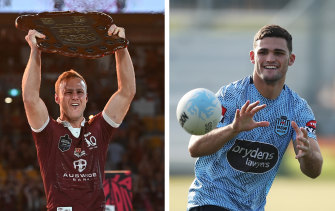