Harry Grant has revealed he was prepared to join the Melbourne Storm biosecurity bubble to help them prepare for the NRL finals.

And it was Brandon Smith and Cameron Smith – the two biggest threats to Grant's long-term dream of wearing the Storm No.9 jersey – who came up with the idea. 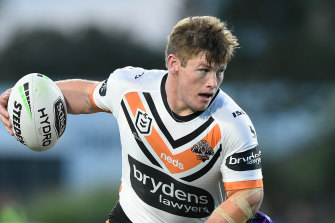 Harry Grant was prepared to join the Melbourne Storm bubble to help the team prepare for the finals.Credit:Getty Images

Grant has spent the week surfing on the NSW north coast and was delighted by his first Queensland Origin call-up.

The race for the dummy-half role now appears to be between Grant and Jake Friend, especially with Ben Hunt firming to play five-eighth because of question marks over the fitness of Cameron Munster.

Grant was an instant hit on loan with the Wests Tigers this year, and even received ''Harry'' chants at Leichhardt Oval when given a spell in round 10 during a big win over Brisbane. He caused a stir last week at the Tigers' presentation night when he said he would not return to the Storm if Cameron Smith played on.

Tigers pin-up Benji Marshall is also a fan. "If I was a club out there in the market trying to build my franchise around one player, who is going to be a generational player, out of all the kids I've seen, Harry Grant is about the top of the list,'' he told Fox League this week.

However, Tigers fans should not get too excited about seeing Grant again in 2021.

In fact, in a sign of the respect Grant and the Storm have for each other, the 22-year-old was prepared to cut short his holiday to play hooker during all the opposed sessions at the club's base on the Sunshine Coast. He has two more years to run on his Storm deal.

"I did look at heading into their bubble where I could have helped them [the Storm] while it could have also kept me in shape for Origin,'' Grant told the Herald.

"But it became a little too much with the quarantine. It was decided the freshen-up after being in the bubble all year would be better for me.''

The idea was first floated after the Tigers played against us up here in round 19. The boys were excited about getting him back.

Storm football manager Frank Ponissi said on Friday: ''The idea was first floated after the Tigers played against us up here in round 19. The boys were excited about getting him back and we were, too.

"Brandon first approached me about it after the game, then Smitty did. Craig [Bellamy, coach] and I spoke about it, but there was the issue of having to quarantine and he would have gone from one bubble to our bubble to [Queensland's] bubble. We told him to go and enjoy himself.''

Grant would have been forced to isolate by himself in Caloundra, away from the Storm playing group, which Paul Momirovski had to do earlier in the season after returning from Sydney.

Should Maroons coach Wayne Bennett give Grant the nod for Origin I on November 4, he knows he will handle the game's biggest stage.

Friday’s loss of Kalyn Ponga, which comes on the back of injuries to David Fifita, Michael Morgan, Ash Taylor, Anthony Milford and possibly Munster, has not dented Grant's enthusiasm about a potential Origin boilover.

"Whoever is there for Queensland will give their all – it's the Queensland way,'' Grant said.

"I've only really trained and played at dummy half, but I'd play anywhere.

"I didn't feel behind the pace this year, and while Origin is another step up, I'm ready for the challenge.

"All I wanted to do this year was prove to myself I could handle playing in the NRL week in, week out, and to earn all the players and staff's respect at the Tigers. I think I did that.''

When told about Marshall's endorsement, Grant said: "I'll have to buy him a beer.'' When the Herald told him he might want to make it a carton, Grant said: "That's what Benji said.''