A heated argument between NSW Premier Dominic Perrottet and ARLC chairman Peter V’landys on Monday night is set to ignite a war between the NRL and state government over stadium funding.

On Monday, Perrottet informed the NRL of the government’s decision to scrap plans to invest in suburban grounds. 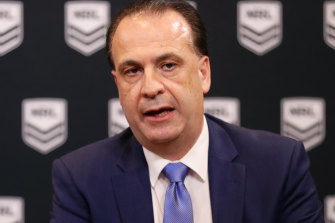 Sources with knowledge of discussions told the Herald that the NRL is exploring its legal options.

The decision may also reignite discussions between the NRL and Queensland government over the future of the grand final given head office has long told the NSW government that the destination of the showpiece event hinged on the level of investment into Sydney stadiums.

V’landys declined to comment on the matter but confirmed that he was waiting a final written response from Perrottet at 5pm on Tuesday.

Besieged NSW deputy Liberal leader Stuart Ayres told 2GB there had already invested plenty in sporting infrastructure and that the state government had “competing priorities” to deal with.

“We’ve had a long-term stadia strategy that we’ve been delivering since 2015,” he said.

“We’ve rebuilt Parramatta Stadium, we’re just about to open the new Sydney Football Stadium. We’re committed to a stadium in Penrith, it reflects our three-city strategy.

“We’ve invested well in excess of $1.5 billion, part of that is, we’d like to have a long-term commitment from the NRL for the grand final.

“But we’ve always got competing priorities.

“We’ve just had COVID, we’ve had substantial flood impacts that have put more pressure on the budget.”