NSW Rugby chief executive Paul Doorn says it is unfair to suggest the Waratahs did not try to keep a number of star players who have departed in recent years and assured under-fire coach Rob Penney has the full support of the board in light of a third consecutive defeat.

After two horrible losses to the Reds and Brumbies, NSW threw away a 13-point lead to fall 20-16 to the Western Force on Friday night. 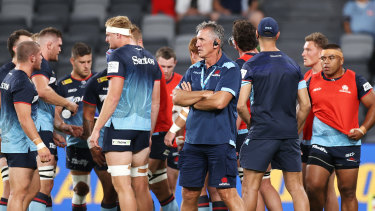 The Waratahs have lost their first three matches of 2021 by almost 30 points a game. Credit:Getty

“Well every team is trying to win every week,” Penney said. “It’s a pretty robust competition and I think if you reflect on the question, of course we would love to win, but it wasn’t to be tonight.

“I don’t know what answer you want from me, but that’s the reality of it this evening. We’ll keep fighting.”

Doorn told The Sun-Herald on Saturday the coach was not in danger of being sacked.

“We still have confidence in Rob,” Doorn said. “What we’re asking for as an organisation is to see improvement in our squad and the playing style. After last night most definitely the boys really put in. A lot of effort continues to go into the squad. We’re still backing Rob.

“The board after every game, whether it’s a loss or a win, there is always discussion about how we can help to build the squad better. It may be around what other resources they might need. That’s a conversation we have every week, there is nothing unusual about it.

“It was a dreadful way to start the season and we do need to do better. Time to step up again against the Rebels.”

Sources with knowledge of the inner workings of the club have told The Sun-Herald that there is agitation for change at board level, notably surrounding chairman Roger Davis, who has been in the role since 2012.

Doorn refuted suggestions Penney might be waiting to be pushed.

More than a dozen Wallabies representatives have left the Waratahs since 2019 and much has been made of the player drain. NSW has lost the likes of Kurtley Beale, Sekope Kepu, Bernard Foley, Israel Folau, Adam Ashley-Cooper and Rob Simmons since 2019. In that time, the Waratahs have said goodbye to players with more than 1800 Super Rugby caps combined.

In light of media reports analysing the Waratahs’ predicament, Doorn came to the defence of the organisation and said salaries were an issue for all Australian teams, not just at NSW.

“I think a lot of times there is an assumption that we didn’t fight to keep players or the players were pushed out the door,” Doorn said. “Except for probably Karmichael Hunt … who was coming off contract and then the coaching staff weren’t willing to commit to him going forward for a whole host of different reasons … it’s a bit unfair to suggest that we didn’t fight for the players. We certainly went in to bat to keep as many as we could.

“In terms of how much money people are being offered overseas, I think this is a real issue for rugby in Australia. We’ve got salary budgets we’ve got to work with. Whether it’s an internal cap or an external one set by Rugby Australia, COVID-19 did impact salaries here in Australia.

“What it didn’t do is impact salaries from as far as we can see across the board, so players are professionals, like everybody else. The assumption that we didn’t try to keep them is not totally fair.”

Five-eighth Will Harrison said there was enough promise in the group to challenge for a title in coming years.

“We have had a lot of players leave in the last few years, but we feel we’ve got the talent here to be a championship-winning side,” Harrison said.

“As a playing group we 100 per cent back Rob. For the last two years he’s only been positive. He’s a great bloke on and off the field. We definitely used that as a key motivator going into this game.”