Home » Rugby » ‘Take the necessary time’: Blues yet to make a call on Teague

Carlton have delayed a call on the future of coach David Teague and say he will be involved in discussing the club’s wide-ranging review before a final call is made.

The under-siege Teague and his manager Liam Pickering had said over the weekend they believed a decision on Teague’s future would be made as early as Monday, but the Blues issued a statement to club members on Monday insisting no decision had been reached. 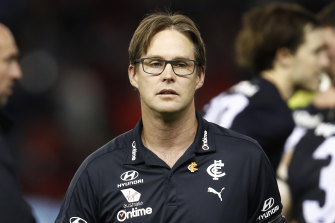 Sources close to the club said Teague will now front the board and provide his analysis of a season where his team failed to make the finals and meet expectations. Other senior leaders will also front the board.

“With our AFL season complete, our club is now in a position to fully brief the senior leaders of the football department on the review findings. This process will commence this week and will involve consultation between the board and football department regarding the recommendations provided,” president Luke Sayers said in a letter to members.

“The club will take the necessary time required to absorb this review and any outcomes or decisions will be made on the timeframe that is in the best interest of the club, not based on external expectations or pressure.

“As always, I remain committed to continue being open and transparent with our members and supporters regarding any outcomes and decisions that will arise out of this review, including the summarised findings, and as such, once this process is complete, our members will be the first to know.”

Unless Teague and his management push the issue, the Blues could wait until next week to determine whether Teague fulfils the final year of his contract. The Blues must also determine whether they are going to seek an expression of interest from Alastair Clarkson, whose time at Hawthorn is now over. Former St Kilda and sacked Fremantle coach Ross Lyon has expressed his interest in the job should Teague and the Blues part ways.