Rugby League Players Association boss Clint Newton had just finished another marathon meeting, slumped into the back of a car, loosened his tie, then was asked via a video conference call if he thought it was fair for players to take a 46 per cent pay cut when the NRL executive only gave up about 25 per cent.

"That's a question for [chairman] Peter [V'landys] and the [ARL] Commission around whether they think it's fair,'' Newton said. 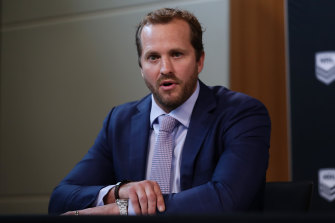 The players have already received their first five months of pay, and will receive a further two months for the remaining seven. The top earners, including Daly Cherry-Evans and Ben Hunt who will lose north of $500,000, will feel as much pain as those on the minimum salary.

There will also be an option for players to tap into their retirement savings if needed.

"Two months [of pay] have been secured, and how they want to divvy that up will be determined by the individuals,'' Newton said.

"Some might want to spread it out, some might want two months up front and do their best from there, or take one month and separate the remaining month's pay. 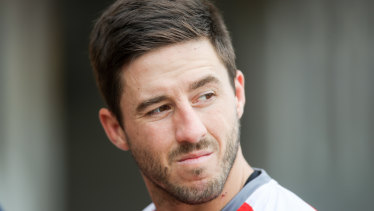 Big earner Ben Hunt will be out of pocket north of $500,000.Credit:Adam McLean

"There is also the ability to withdraw funds that are connected to each individual's retirement accounts. That's also part of the detail we'll work through with the NRL around the guarantees of that money being available if or when the players want it.''

Newton said there was a ''fair level of disappointment'' when it was discovered about $10m was missing from the players' retirement fund. The NRL stressed that money would be there by the end of the current collective bargaining agreement.

Newton added the past few weeks had made everyone realise it had cost too much money to run the game, and changes needed to be made, something which had already been publicly addressed by V'landys.

"It's unsustainable to keep operating the way it has been, given the significant financial stress clubs are now under [especially] if we were to not play any more matches,'' Newton said.

There has been talk of the salary cap being reduced next year to help ease the financial strain on clubs – with suggestions the cap could dip as much as 40 per cent. Newton said it was important all contracts were honoured, and if there was a reduction ''we'd look to work on a proportionate amount of what is reduced''.