Home » Rugby » The $10 million investment reaping rewards for the Swans

Sydney are reaping the rewards from a $10 million-plus investment into their academy, as the club’s recruiting boss forecast a time when the rest of the league will also share in the spoils.

Swans young gun Errol Gulden declared he would not be playing in the AFL if not for the club’s academy program after becoming the first member of the Swans’ bumper 2020 draft crop to be nominated for this year’s Rising Star award. 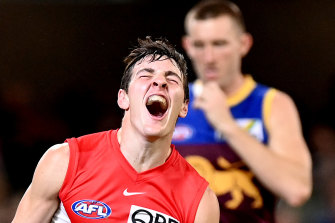 Of the 2400 youngsters who have been part of the Swans’ academy, only 12 have played a senior AFL game, including Errol Gulden.Credit:Getty Images

While rivals have been upset by some of the elite talent it has produced for the Swans, the club has argued the academy has found players who otherwise would have played other sports. It says 74 per cent of its players take part in three or more formal sport programs.

The 27-week program, which costs about $1 million to run, has nine training locations throughout NSW, including three in Sydney and non-traditional AFL centres Newcastle, Port Macquarie and Coffs Harbour.

Gulden said he would not have been on the Swans’ list if not for the academy, a point echoed by his father who rang Melbourne radio station SEN to say he would have played the round-ball code.

“I’ve been on the record before, I wouldn’t be where I am without them,” the young Swan said.

“They make you really aware of all the little things and one percenters that can get you to the top level and being drafted. Your diet, recovery, reviewing your performances with your coaches – they give you an insight as close as they can to life as an AFL player.”

The Swans’ list manager Kinnear Beatson said he had noticed a marked rise in standard and football knowhow among the youngsters.

“You could hear the kids saying things like ‘switch it to the fat side’, ‘quick hands out the back’, ‘form the zone’,” Beatson said.

“Those things you think, ‘geez, those kids are starting to understand the game a lot more’ rather than just get it and kick it. That’s particularly evident with how Errol and Braeden play the game.”

To date, there have not been enough elite players to make it to other clubs but Beatson says in time the academy will become an exporter of talent. Carlton’s Luke Parks and Adelaide’s Ben Davis both found new homes after coming through the program.

“Hopefully it gets to a stage where we can’t take them all,” Beatson said. “We might have to get them back via trades or free agency when they want to come home. Maybe in 15-20 years because there’ll be oodles of them running around as first-rounders. They’ll help grow the game, absolutely.”