The sight of Payne Haas, jersey ripped and pectoral muscles on full display while walking to the sin-bin after punching on with bitter Queensland rival Tino Fa'asuamaleaui, drew the loudest cheer of the night.

In fact, big Haas was given a standing ovation at ANZ Stadium as the biff was finally brought back, albeit for about one minute. 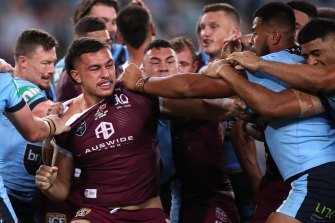 Tino Fa’asuamaleaui gets ready to unload a right on Payne Haas.Credit:Getty

"They would have read the paper today and it stirs the emotion in them.

"It's the type of headlines young men don't handle. They didn't handle it well tonight.''

Tensions finally boiled over in the 57th minute when genuine heavyweights Haas and Fa'asuamaleaui took matters into their own hands. 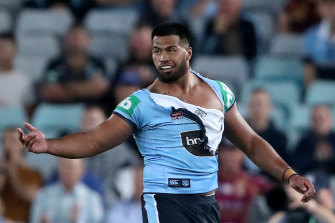 Bring it on: Payne has heads to the sin bin.Credit:Getty

Queensland had been awarded a penalty before the ball was thrown away in back play and tensions flared.

Nathan Brown, the Blues debutant who has never minded a bit of niggle, was front and centre with the push and shove.

Then Haas and Fa'asuamaleaui, both 20, launched a few haymakers.

Every single player got involved as referee Gerard Sutton tried to work out how many other players would be joining Haas and Fa'asuamaleaui in the bin. Sutton was overheard yelling ''at the very minimum Payne and Tino will be in the bin''.

As Haas was given his marching orders, he turned to the Queenslanders and Fa'asuamaleaui and subtly signalled for his giant mate to come at him again.

It was fantastic theatre. Not quite Mark Geyer and Wally Lewis exchanging pleasantries as they came from a rain-soaked field. Nor was it anything like the Paul Gallen whack on Nate Myles in 2013, which was the beginning of the end for fighting in rugby league.

The stink will no doubt set up an explosive finish at Suncorp Stadium next Wednesday, especially when the two young front-rowers aim up against each other again.

They will be sweating on avoiding striking charges, which carry a base penalty of 200 points, or two matches.

It is debatable whether the hatred still exists between them off the field.

They hugged after the game. And they were inseparable, along with David Fifita, while in Fiji with the Prime Minister's XIII last year. Haas' little brother is also about to join Fa'asuamaleaui on the Gold Coast next year.

Haas was enormous in his starting role and finished with 150m. Fa'asuamaleaui ran with plenty of purpose for the visitors, just as he did all year for the premiers Melbourne.

The first sign of some bad blood started early in the second half when Jake Friend stood over the top of Junior Paulo. Paulo did not like the gesture and made it known.

The Maroons continued hitting Nathan Cleary after he had kicked, but with a bit more venom.

The Blues were also happy to start shoving a few of the Maroons, including rookie winger Xavier Coates.