Home » Rugby » The final straw: Why V’landys sided with NRL clubs over his own executive team

If, and it’s probably safer to say when, several members of the NRL executive team are marched out of League Central in coming weeks, it will be come to be seen as the straw that broke the camel’s back.

A line-in-the-sand moment that this column understands could even see Todd Greenberg's tenure brought to an end as early as this week, coinciding with the announcement of the 2020 season resumption. 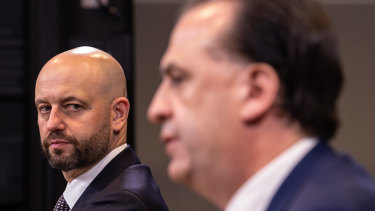 V’landys was "apoplectic", as it was described to this column by a club official, when he found out that someone at head office went against his directions – and those of his board – last month to distribute funding to each of the clubs.

V'landys, who is a "man-of-my-word" type of guy, promised clubs a $1.21 million guarantee for the next three months to stay afloat during the coronavirus pandemic that forced the shutdown of the competition.

So you could imagine his anger when he was inundated with phone calls from club chief executives wondering why the game wasn’t delivering on his promise. 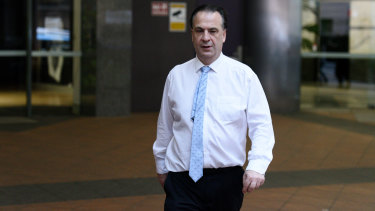 Club bosses raised another issue with the calculations coming out of NRL headquarters.

For the last two and a bit years, since the start of the new broadcast cycle in 2018, the clubs had been putting aside about $187,500 per year into the NRL operated distress club fund for a rainy day.

Now that it was flooding, the NRL had agreed to redistribute those funds. Although clubs were once again short-changed more than $30,000.

The NRL paid the clubs for the previous two years, as well as for November, December and January in the latest rugby league financial year. A total of $421,875.

It was less than clubs were anticipating. They were told that the fund had been exhausted, only problem was they had also paid for February and March and told V'landys they were entitled to $453,125.

A few angry phone calls later and the $31,250 the clubs were still owed was transferred into their coffers.

“The clubs have got enormous faith in Peter because when things like this are raised with him, he takes the issue into consideration and delivers a solution," one club boss told the Herald.

"That hasn’t always happened in the past."

When broken down, it doesn’t sound like much in the overall scheme of things. But both decreased transactions would have denied the clubs a combined $1.6 million had they not turned to V'landys.

For the game's leader, who he can trust is of far greater concern.

Early Frizell exit could be win-win

Tyson Frizell felt disrespected by the Dragons throughout contract negotiations and in turn signed with the Knights for 2021, but it's not beyond the realms of possibility he jumps ship beforehand. 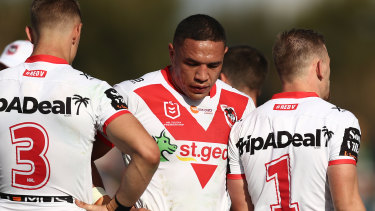 Tyson Frizell’s immediate future may become the centre of great debate if the Dragons struggle at the resumption of the 2020 season.Credit:Getty

Frizell has given his commitment to the Dragons for the rest of the year, but if the Dragons continue to struggle it may make financial sense for the club to let him leave early and save about $300,000 in the salary cap if he was to leave before the June 30 deadline.

No formal discussions have been had yet but you can be assured it'll be a topic of great debate if the Dragons' winless start to the season continues in the opening rounds. The Knights still have a spot on their roster and a little bit room in the cap for this season.

Player managers will be a little concerned at the moment. The NRL has asked Cronulla Sharks chief executive Dino Mezzatesta to compile a report into the state of affairs around the agents, with discussions around decreasing their potential earnings.

Most NRL player agents earn six to seven per cent of their clients' contract. The NRL want to head towards the AFL model, which is closer to four per cent. There's also a push to stop player agents from representing coaches, as well as potential to cap the number of players per agency. 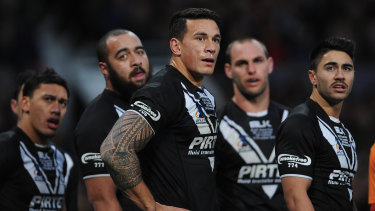 Last month this column conducted a poll of club chairs and CEO's, with 25 per cent of respondents selecting “player agents” as the biggest issue facing the game.

November Tests on the cards

The International Rugby League board has voted to suspend the representative window, with NRL and Super League clubs under no obligation to release their players at the end of the year.

However high-level discussions are being held about using October and November as a period for international football.

One idea being tossed up is a three-game series between Tonga and New Zealand that would run parallel to a proposed State of Origin series after the NRL season. A potential Sonny Bill Williams–Jason Taumalolo showdown would generate enormous interest.

Coaches in the gun

The early suggestion is that could drop about 20-30 per cent to around $4.5 m in 2021. The likes of Craig Bellamy (highest paid coach at $1.5m a year) could be forced into a substantial pay cut.

Get our Coronavirus Update newsletter for the day’s crucial developments at a glance, the numbers you need to know and what our readers are saying. Sign up to The Sydney Morning Herald’s newsletter here and The Age’s here.